Dispersion forces - what determines which molecule will have its electron cloud repelled?

Here is an image I found which illustrates dispersion forces:

You are correct that the electron clouds would repel each other equally.

The induction as shown in your second picture would require another outside entity, polarizing one of the He atoms, which would then affect the other.

At an arbitrarily show distance, we might describe a molecular orbital formation between the two helium nuclei, as shown here: 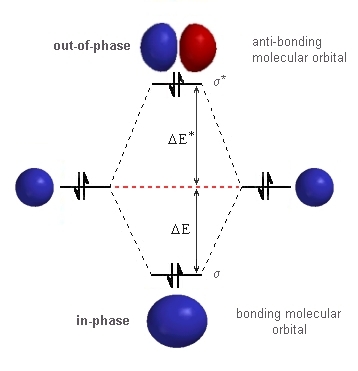 In this case, without the external perubation, the orbital shape (and hence the electron clouds) is (are) quite symmetrically distorted.

However, it becomes nonesense to describe a system of two atoms. In liquid helium there are manifold other charge fields distorting these nice shapes, and you may get some asymmetry as shown in your picture above.

3
When considering Van der Waals forces, why do dipoles form?
5
What type of intermolecular forces will dominate Diethyl ether?
8
At what frequency does a non-polar molecule acquire a dipole able to participate in London Dispersion forces?
1
Why do ethanethiol molecules have stronger London dispersion forces than those of ethanol?
3
Why is the boiling point of water and ammonia so different?
2
London/dispersion forces
16
Why does graphite have a high melting point even though its intermolecular forces are weak?
5
When non-polar particles interact through dispersion forces, how fast does a temporary dipole induce a dipole in the neighboring molecule?