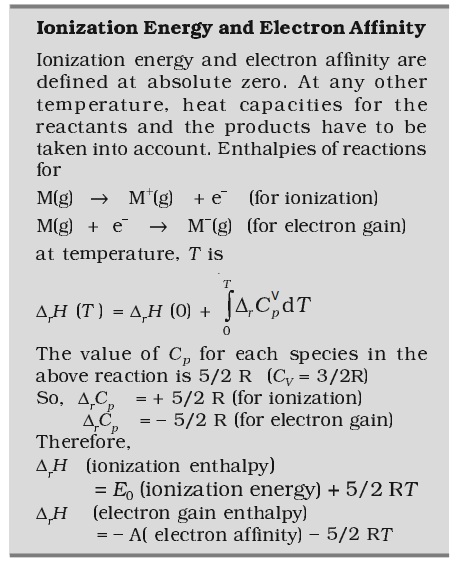 This is from my textbook. But in other reference books I am using and Wikipedia, there is not any mention of absolute zero while defining Ionization Energy and Electron Affinity. What does it mean? Please Elaborate

This is a practical matter of making sure that there is a common basis for comparing values from all different types atoms and molecules. If it were not the case there would be a range of different values for the same type of atoms or molecules.

Also, if this was not done the $\Delta H$ values would in effect have double counted the effect of temperature, once in the ionisation energy and again in the heat capacity term.

The first answer is correct because as its highest occupied state changes,the energy required to remove it valence electron also increases.So one will have to supply the minimum energy for its ionisation which is its characteristic at a particular temperature and the additional energy as its occupancy has changed.

When making definition all cases are to be considered.the necessity to include absolute zero temperature is because of the energy being spent from the energy you give or supplied energy for reaction by reactant to change it's volume and pressure.TsO(delta(r)C(v)(p)dT determines this change.if you compare this to simple equation for enthalpy this term equal to PV. For ideal gas PV=nRT.here T is temperature in absolute scale.So we can see enthalpy of same reaction can variety with value of T . For this absolute zero is taken as the standard to define enthalpy of any reaction like the reaction for electron affinity or ionization.

Not the answer you're looking for? Browse other questions tagged physical-chemistry thermodynamics gas-laws ionization-energy or ask your own question.