Is the attached compound a chiral or achiral overall? My lecturer said that this is an achiral compound because it has a superposable mirror image but I don't get that. So I tried to figure out the configuration of both stereogenic centers because what I understood is when you have an even number of chiral centers and if they have opposite configuration, say (R,S) or (S,R), they will cancel out each other so that specific rotation is zero and two chiral centers are overall achiral, which gives you a meso compound.

The staggered, conformation of (2R,3S)-butane-2,3-diol (1a) that you have shown does not have mirror planes but rather a center of symmetry, which is the reason that this conformation does not rotate plane polarized light. There are two other stable, staggered conformations of the diol, namely 1b and 1c. They are a racemic pair, each of which is chiral. But like any racemate, it is optically inactive. Each of these staggered conformations has also been represented as Newman projections with the S-carbon in the front (1a', 1b' and 1c''). Rotation of 1c'' by 180o about a vertical axis passing through the center of the C2, C3 bond leads to structure 1c', which is the mirror image of structure 1b'. A time tested device for ascertaining whether or not a compound is meso is to pair like groups in an eclipsed conformation (1a''). While this technique serves its purpose and conformation 1a'' has a plane of symmetry, its population in solution is negligible as is the racemic pair of eclipsed conformations (not shown). 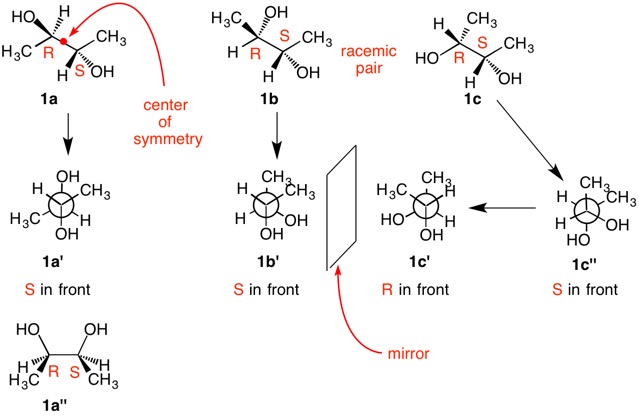 Build a model of the molecule and rotate it around that central bond if you can't visualise this in your head.

A molecule is chiral when it doesn't exhibit any kind of symmetry.

This particular molecule exhibits centre of inversion symmetry, i.e. it's symmetrical about a particular point.

In this question that point is the midpoint of the bond joining the two substituted carbons.

If you would like to know about the different types of symmetry, Wikipedia has a good page on the topic.

1
Conformers of a meso-compound
5
Are a meso compound and its mirror image isomers?
7
Why can't we rotate a carbon while checking for chirality?
0
Identifying Meso compounds
1
How are these molecules chiral and achiral?
1
Identifying a meso compound
-1
Centre of Invertion/Centre of Symmetry
0
How do we determine molecule chirality in these examples?
2
Does the 3D conformation of rings affect chirality?

9
What does the "D" group represent on a chiral center?
5
Are molecules chiral if a rotation leads back to the same compound?
7
Does an axis of symmetry determine chiralty?
41
How to derive these general formulae for number of stereoisomers of a compound with a possible plane of symmetry?
3
Are our hands really chiral?
4
Is the existence of chirality center equivalent to chiral?
3
Conversion of molecular structure into Fischer projection for compounds having more than two chiral carbons
7
Does 1,4-dimethylcyclohexane have a chiral center?