I was reading this question and the answer by user EricBrown to it, and this got me thinking about covalent chemical bonds.

The way I was always taught is that a single bond contains 2 paired electrons, a double bond 4 etc (The Lewis dots drawings always show this nicely). In his answer Eric mentions that the whole definition of single, double etc bonds is ambiguous because there haven't been measurements of the electron density. This notion strikes me as odd, because a simple googling gives me articles like this: How similar is a molecule to another? An electron density measure of similarity between two molecular structures Int. J. Quantum Chem. 1980, 17 (6), 1185–1189. But it did make me think about the way the different types of bonds are defined.

I read up a bit on the Theory of atoms in molecules and indeed this theory only specifies 1 bond type: the line with maximum electron density between two nuclei. According to the theory this line is unique for a given pair of nuclei in a given molecule. I could imagine that a molecule which has a triple bond (6 bonding electrons in the 'classical' theoretical sense) would have a relatively high electron density along this maximum line as compared to e.g. a single bond.

Below are plots of the electron density for staggered ethane, ethene, and ethyne, computed from electronic structure theory. For ethene, which is planar, imagine that the hydogens are jutting forward and backward into the paper, so that the contour plots should contain any putative $\pi$ bonds. It is the orthogonal plane that still contains the two carbon atoms.

A couple of points that I wish to make:

My question is, where do we draw the dividing line in the correlation between electron density at the bond critical point, and what constitutes single, double, and triple bonds?

Responding to @michaelm: I might have expected this, if for example, ethene were to have a "double bond" between the carbons: 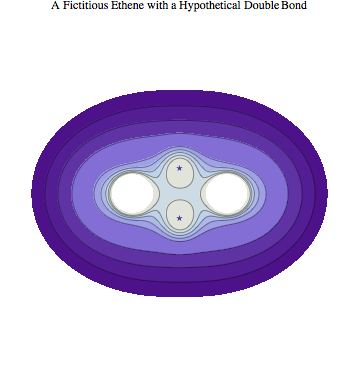 This is a plot for the f-localization domain in the ethylene molecule. Surfaces are colored according to the basin they belong to: magenta for core basins, light blue for the C-H bonds, and green for the C-C banana bonds. 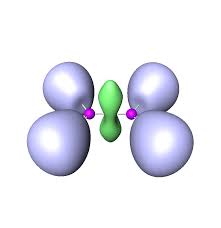 Not the answer you're looking for? Browse other questions tagged molecules bond theoretical-chemistry covalent-compounds qtaim or ask your own question.

78
Bonding in diatomic C2, a carbon-carbon quadruple bond?
11
Why do single, double and triple bonds repel each other equal amounts?
3
Approximation of electron density of a small molecule
3
Why do double bonds break
6
Is there any way of representing a dative/coordinate covalent bond?
2
Covalent bonds other then 2-center, 2-electron bonds
23
Why are the C-C bonds in benzene closer in length to double bonds than single bonds?
4
Are the Phosphate and Sulfate ion diagrams with double bonds an invalid picture?
2
Why is the force constant for double and triple bonds approximately double and triple of that of a single bonds?