How are SN2 transition states stabilised by adjacent double bonds and carbonyl groups?

It is my understanding that transition states in an SN2 reaction have some filled and some empty orbital character, as we have the backside of the C-X σ* beginning to fill with electrons from the HOMO of the nucleophile, forming a C-Nu σ bond in the process.

If we have an adjacent carbonyl group to the α carbon, I have learnt that the TS is then only stabilised by the C-O π*, i.e. by electron withdrawal and not by the C-O π.

However, with adjacent double bonds, I have learnt that the TS is stabilised by both the C-C π and the C-C π*.

I was wondering why this would be the case, as looking at the shape of the orbitals, there seems no reason that the C-O π could not align itself so that the partly-empty p orbital in the TS is parallel to the lobes of this MO, therefore stabilising the TS as new lower energy MOs form.

Also, with regard to the best representation of these structures, I always see partial negative charges on the Leaving group and the Nucleophile in the transition state, but never the positive charge located on the α carbon. Surely if with adjacent carbonyl groups we only have stabilisation by electron withdrawal, it is valid to put the partial positive charge there?

Unsaturated groups conjugated to the site of attack (aromatic rings, alkenes, carbonyl groups) all tend to have the effect of increasing the rate of an SN2 reaction at that centre.

As an example, displacement by nucleophilic iodide in acetone as a solvent is ca. 30x faster for allyl chloride than ethyl chloride, with benzyl chloride being faster still.[1]

The effect was initially thought to be steric, given that unsaturated groups are sp2 hybridised (and therefore planar) and allow the nucleophile a less hindered approach, but many empirical and computational studies now dispute that, with a stereoelectronic effect[*] widely accepted (though sterics may play a small role).

Empirical Evidence for a Stereoelectronic Effect

One of the earliest indications that the effect was stereoelectronic was via a series of experiments conducted by Payne (shown below) [2].The open (acyclic) compound reacts ca. 8000x faster than the closed (cyclic) compound. To understand why, we have to consider the orbitals involved... 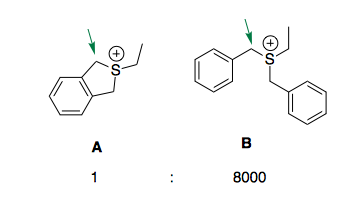 If we accept a stereoelectronic effect (coming back to Payne’s findings later), we then have to decide whether the effect is a ground state effect (weakening of the C-X bond, raising the energy) or a transition state effect (stabilisation of the TS, lowering the energy). To quote Fleming (emphasis my own):[3]

In practice, computational studies [4] prove this to be the case, with the pi bond interacting with the principal axis of the SN2 transition state (sigma-pi conjugation):

Calculation of bond lengths also agrees with this mode of conjugation, with the C-C bond length decreasing upon stabilisation of the TS:

Hopefully, by this point, Payne's experimental results are obvious. In the cyclic structure, there is no way of allowing the pi-orbitals on benzene to correctly align with the SN2 transition state (given that we know the TS is linear, not bent).

One final thing to notice is that in both the alkene and carbonyl case (as in your question) the dominant effect is thought to be as above (sigma-pi conjugation).

[*]: Sorry Jan, couldn’t help myself with the bold, I’m not shouting, I promise…

In case of an adjacent carbonyl group, the carbons attached to the leaving group and oxygen are electrophillic due to the presence of a σ * and a π* low-energy orbital respectively. These combine to form a LUMO which is even lower in energy. So each carbon becomes more electrophillic due to the other. Now, the nucleophile may attack the C=O but it is reversible. In such a case, Nucleophillic substitution is highly favourable as the displacement of leaving group is irreversible.

As for the allylic carbon, the carbon in the transition state is electron deficient as it forms "partial bonds" involving 2 electrons, which is remedied by the electron donating ability of the π bond, stabilising the T.S., thereby increasing the rate. The stearic hindrance is small enough to be neglected(compared to a more expansive sp3 carbon)

The double bond has a high electron density. Therefore, it helps the nucleophile pull the small carbon loop in the backside attack. Same applies for the ajdacent lone pair.

12
Why are alpha carbonyl halides most reactive towards SN2 reactions?
0
Which one will undergo sn2 most easily?

1
Why does acetyl have negative charge?
4
HOMO/LUMO and charge distribution
4
When is donation into an anti-bonding MO stabilising?
10
Are nucleophilic substitutions reversible?
2
Why do Grignard reagents act as sources of nucleophilic R− and not Br−?
2
Why don't we consider the attached hydrogens in inductive effect?