I'm trying to create an experiment where two immiscible liquids are mixed and are then separated by density. Most of the container is occupied by the lighter liquid, and the small amount of heavier liquid sinks.

Then, a third liquid, immiscible with the other two is added, in amounts intermediate between the two. This liquid is lighter than both of the other liquids and floats.

However, this 3rd light liquid can wet the dense liquid, and after mixing it carries it upwards to the top of the container, basically creating a flotation process.

Here's a rough sketch of what I want to achieve: 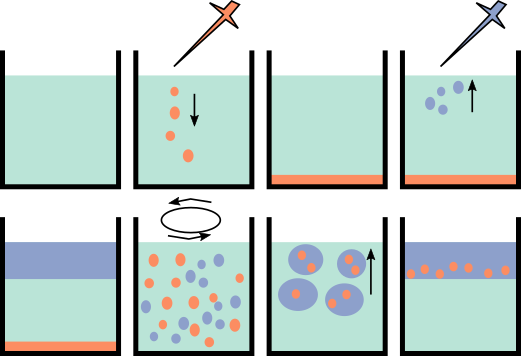 This is slightly similar to industrial flotation processes that separate ore minerals from a slurry of crushed rock. Air bubbles "wet" surfaces of heavy minerals such as copper sulfides and lead sulfides, and float them to the top of a container. In my case I'm talking about three liquids and not a liquid, solid, and a gas.

The reason I'm asking is that I created something similar at high pressure and temperature (~1 GPa, 1000 C) in a sealed pressure vessel and I'm looking for a good way of demonstrating this phenomenon in a more accessible way.

Is there such a thing? I have access to common (and some uncommon) chemical reagents. The liquids have to be transparent, obviously, to see the entire thing. Preferably coloured, or possible to colour them.

I played around a bit with this in the lab and this is what I came up with. Basically, I made a three phase system with hexanes on top, water with fluorescein and green food colouring in the middle, and a perfluoroalkylether HT-110 on the bottom. Just finding three mutually immiscible liquids was pretty challenging and unfortunately, like most highly fluorinated liquids, HT-110 is almost twice as dense as the other two liquids, but if you look at the video carefully, you can see that some bubbles of HT-110 are getting trapped in the hexanes as its surface energy isn't quite as high in hexanes as it is in water. When I tilt the vial on its side, you can see these bubbles snapping back across in the interface.

It's not perfect, uses a goofy solvent, and I probably could have played with the liquid ratios/container shape to trap more HT-110 at the top, but it seems that something at least similar to what you're after can be made fairly simply.

Not the answer you're looking for? Browse other questions tagged experimental-chemistry phase density immiscibility or ask your own question.

4
Is there anything that doesn't mix with water or oil?