Which pH approximation to choose when?

When I learned about pH approximations in school, I was told that each approximation fits to a certain acidity strength/pKa range. Those ranges are grouped in common categories (pKa borders are only approximately, as they change from book to book):

From this point on, the arguments were made and approximations for certain strengths of acids were evaluated. But is it possible to choose the "right" approximation only based on acidity strength? Do those equations really only apply to it's categories?

This question originates in my wish to implement a program on my calculator that computes the pH for a given concentration and pKa value. I thought it might be wrong to simply ask for the pKa value and choose one of the approximations solely based on that.

Given error contours are not "real measurements vs. calculations" but absolute differences between approximation n and the cubic equation that is not more simplified than using concentrations instead of activities.

If you have a calculator that can solve cubic equations, you don't need to simplify. In addition you only would have to remember one equation, no matter which pKa or concentration occurs (see above for real world restrictions).

Results from this equation will be the reference pH values for the following comparison of pH approximations. 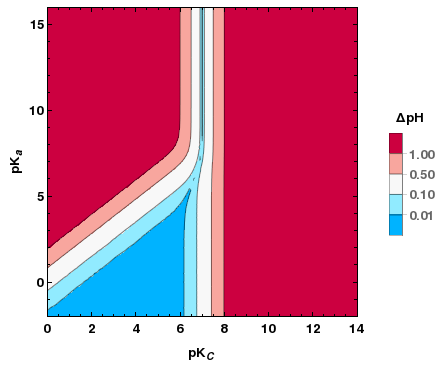 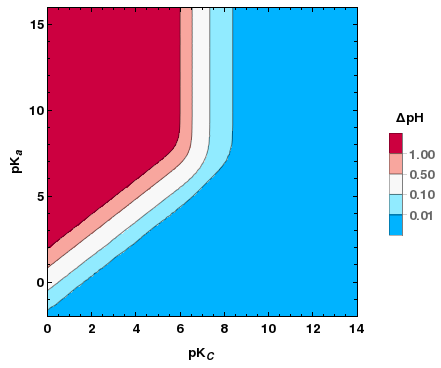 It's not surprising, that the range of usefulness increases over the whole are of diluted concentrations. And that the high pKa values are also covers is only due to the fact that the pH is 7 everywhere upon concentrations that are below $10^{-7}\ldots10^{-8}$. 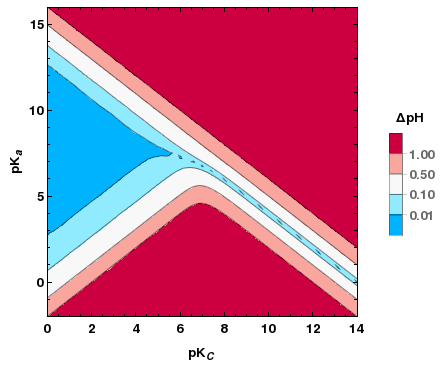 It is obvious, that the approximation is useful in a small area where the acid is not too diluted and it's pKa value is not too low. Seems to fit well for weak acids.

Again, what happens if $k_\mathrm{W}$ gets involved involved? 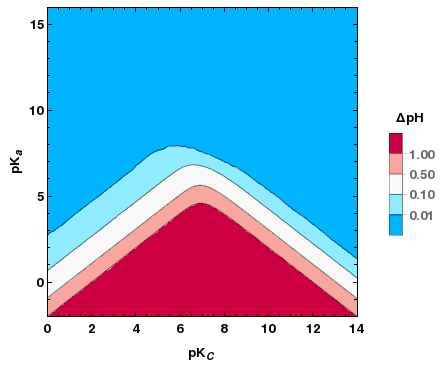 The last approximation is for strong acids that are not diluted. The amount of protons in solution is equivalent to the amount of dissociated acid but this time with taking $k_\mathrm{a}$ into account. As only the influence of the autoprotolysis of water is neglected, it is "the most accurate" approximation for high to medium concentrations. This can easily be seen as it includes the scope of both approximations, 1 and 2. It is again a quadratic equation in x. 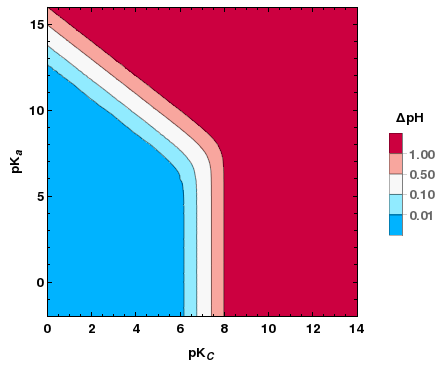 1) The best -- which function yields the lowest error in comparison with the exact equation? 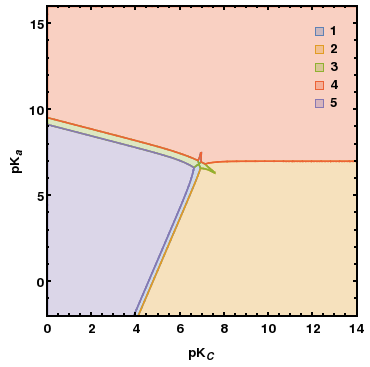 2) The easiest -- which function yields the lowest error in comparison with the exact equation and if there is more than function with $\Delta \mathrm{pH} < 0.1$, which one is the easiest to remember? 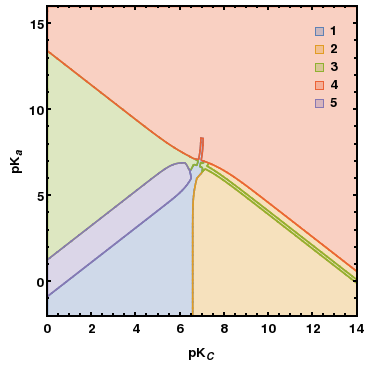 So ... the pka ranges kind of resemble when to use which function but in the end it's a little bit more complicated. If $k_\mathrm{W}$ is neglected, the low-error-area (LEA) is quite small, only approx. 5 is able to yield acceptable values for a big range of concentrations and pka values. Approximations 1 and 3 should be used with care, as their LEAs are quite fancy. For approximations 1 and 3 it's often better to switch to their low-concentration counterparts 2 and 4 to be on the safe side.

3
Calculating the dissociation constant of one acid in a mixture
2
Solving for H+ given dissociation of weak acid, c and Ka Can the quadratic equation yield two nontrivial solutions?

5
Computation of pH when an acid and base are mixed in solution
4
How do indicators work when they mixed with each other?
5
What happens when 0.02 mole NaOH is added to a buffer solution?
24
How is the pKa of extremely weak acids determined?
5
How can I choose an indicator for determining the concentration of a base using its pKb values?
5
Why is a buffer solution best when pH = pKa i.e. when A-/HA=1
0
Which white powders form acids when mixed with water?
6
Which definition of Acids and Bases conforms to the pH scale?