I am stuck between two paths. I was going to protonate the alcohol to give a better leaving group, leaving a 2 degree carbocation and then go on with a hydride shift. But, I'm not sure what that may turn out to look like, and when exactly the ring is supposed to contract. Or, I was going to have the alkene attack the acid, but after that I wouldn't know what to do with the alcohol.

Mechanistically, both of those protonation options (at the alcohol or the alkene) are reasonable. Without any other information, I would probably try both and then see if either gets closer to the product.

However, two things suggest to me protonation of the alkene:

1) As suggested, protonating the alcohol generates a good leaving group (water). However, the product has a C-O double bond, so breaking the C-O single bond appears to be unproductive. That's not to say it's impossible, but it leads me to think about trying something else first.

2) The product has a methyl group, but the starting material does not. Somewhere in the mechanism, that methyl group has to be formed. If protonation of the alkene is the first step, then a methyl is formed, which I see immediately as productive. Again, that's not to say that this protonation is definitely correct, but at least something productive has happened.

One last tip before I show my suggested mechanism. For any mechanism that is difficult to draw, but especially rearrangements, it can be very helpful to draw in the hydrogens. In this case, drawing in the hydrogens just about gives away an exact mapping of the carbons from the starting material to product. With a mapping, it becomes easier to determine all of the bonds broken and formed, which is essentially a checklist of all of the goals of the mechanism.

I'll leave it to you to add the curved arrows, but the intermediates are shown below. Protonation of the alkene in 1 gives carbocation 2, which contains the methyl group seen in the product 4. Next is the ring contraction, sliding a C-C bond over the the carbocation and generating new carbocation 3. Compound 3 might appear to be less stable than 2, but it turns out to be quite stable due to resonance structure 3', which is fully octet. Deprotonation gives 4. 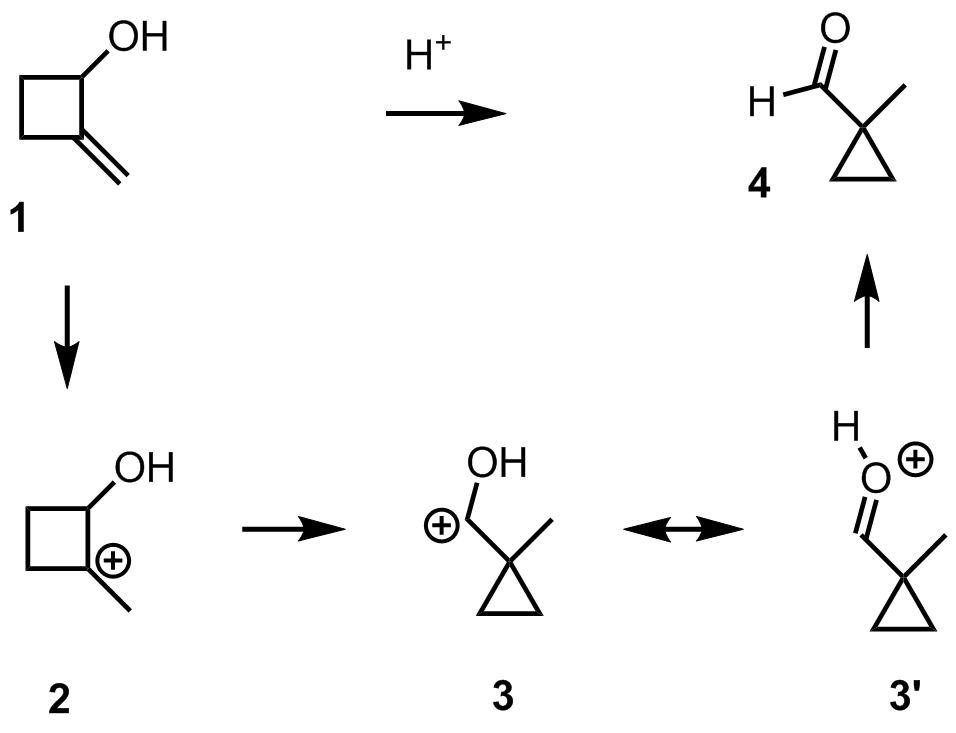 Contraction only takes place when the oh group is axial right? If the oh group is eqitorial then then hydride shift can take place to give a planar carbonation through pinacol-pinacolone rearrangement to give more stable 4 membered ring structure.

18
Designing a theoretical synthesis of methamphetamine from phenylpropyne
17
Would the carbocation intermediate undergo rearrangement?
5
Intramolecular lactonisation in an unsaturated carboxylic acid
7
NGP mechanism vs the simple carbocation mechanism
7
Bond cleavage of 3 membered cyclic ring on heating
1
Can some one please explain alkyl shifts for me
0
Hydride shift and Ring Expansion