In an aldol condensation reaction, I synthesized a molecule out of two unknown reactants. These reactants I found to be 4-chlorobenzaldehyde and acetophenone which made 4-chlorochalcone. I was given an H NMR spectrum to identify and label the hydrogens for the molecule but am having trouble reading it!

There is a quintuplet with an integration of 6 but no where in the molecule am I seeing 6 hydrogens that share a chemical environment (I counted 7 environments). Is this possible or could I have come up with the wrong product structure?

Any help deciphering this would be great! 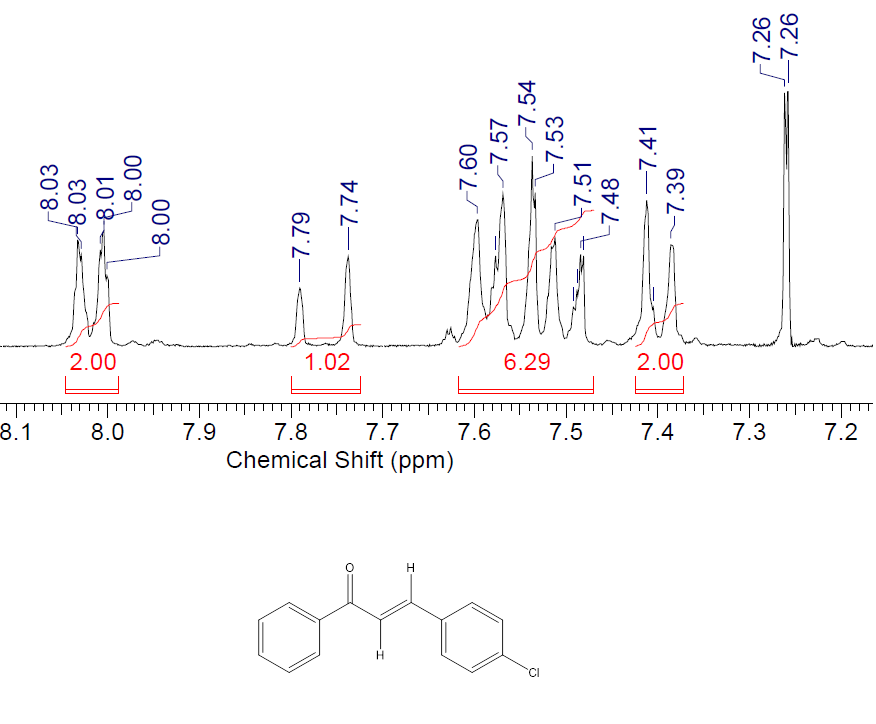 As with all NMR analysis problems like this, it is good to have a strategy to interpret data. Perhaps rather than looking at your spectrum and trying to rationalise your structure, look at your structure and predict what you might expect to see in your spectrum. You'll find it much easier to rationalise the appearance of your peaks, especially in the case of overlapping peaks as you have here. So, in your molecule, what splitting would you expect?

You have 11 proton environments, so your integrals look fine. Your chloroform doublet is a bit of a worry though. Perhaps your sample needs to be mixed a little better? You've got 3 distinct spin systems that will give characteristic splittings:

This is clearly a homework/lab problem, so this should be enough to keep you going until the next question.