Factors affecting mass of a gas-evolving reaction mixture over time

Excess magnesium was added to a beaker of aqueous hydrochloric acid on a balance. A graph of the mass of the beaker and contents was plotted against time (line 1).
What change in the experiment could give line 2? 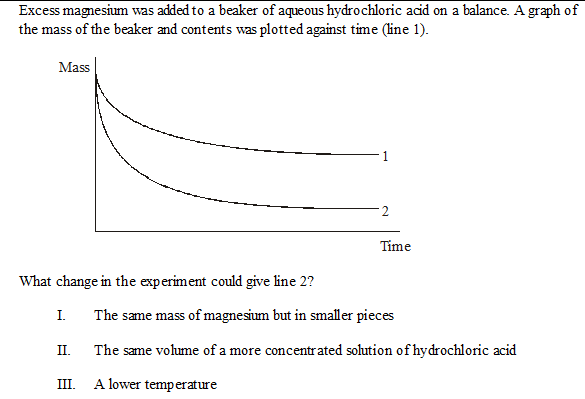 The answer is just II. However, I thought that both I and II would answer the question. Why is it just II?

As the reaction progresses, $\ce{H_2(g)}$ is released and hence the mass decreases.

I believe you are right, both I and II could be correct.

II, because a greater quantity of $\ce{HCl}$ will lead to more $\ce{H2}$ leaving, hence a greater mass decrease.

I. False – because the magnesium has a higher surface area in this reaction, the rate will proceed faster, producing a steeper slope in the graph; however, the final mass of the solution will be the same in both experiments. We would note that the lines converge when each system reaches equilibrium.

II. True – the higher concentration of $\ce{HCl}$ means more $\ce{H2}$ gas will be lost from the system at equilibrium. Thus, the line would flatten beneath line 1.

III. False – a lower temperature would mean the average kinetic energy of molecules in the system would be lower; therefore, a smaller fraction of the molecules will have sufficient energy to react with others. In this case, we would note an elongated curve that converges with the first.

Not the answer you're looking for? Browse other questions tagged acid-base kinetics erratum or ask your own question.

9
How can I make an acidic pen to burn paper on writing on it?
4
Neutralization reaction between ammonia and nitric acid
9
Belousov-Zhabotinsky reaction: questions about rate determining step, k and activation energy
6
Why would rinsing the flask with acid in this experiment affect its accuracy?
1
How does this reaction occur?
3
What changes occur when adding differing amounts of acids & bases?
1
Help understanding the synthesis of HOCl
1
Rate of change and kinetics order of reaction question