Reactions of ketones and aldehydes 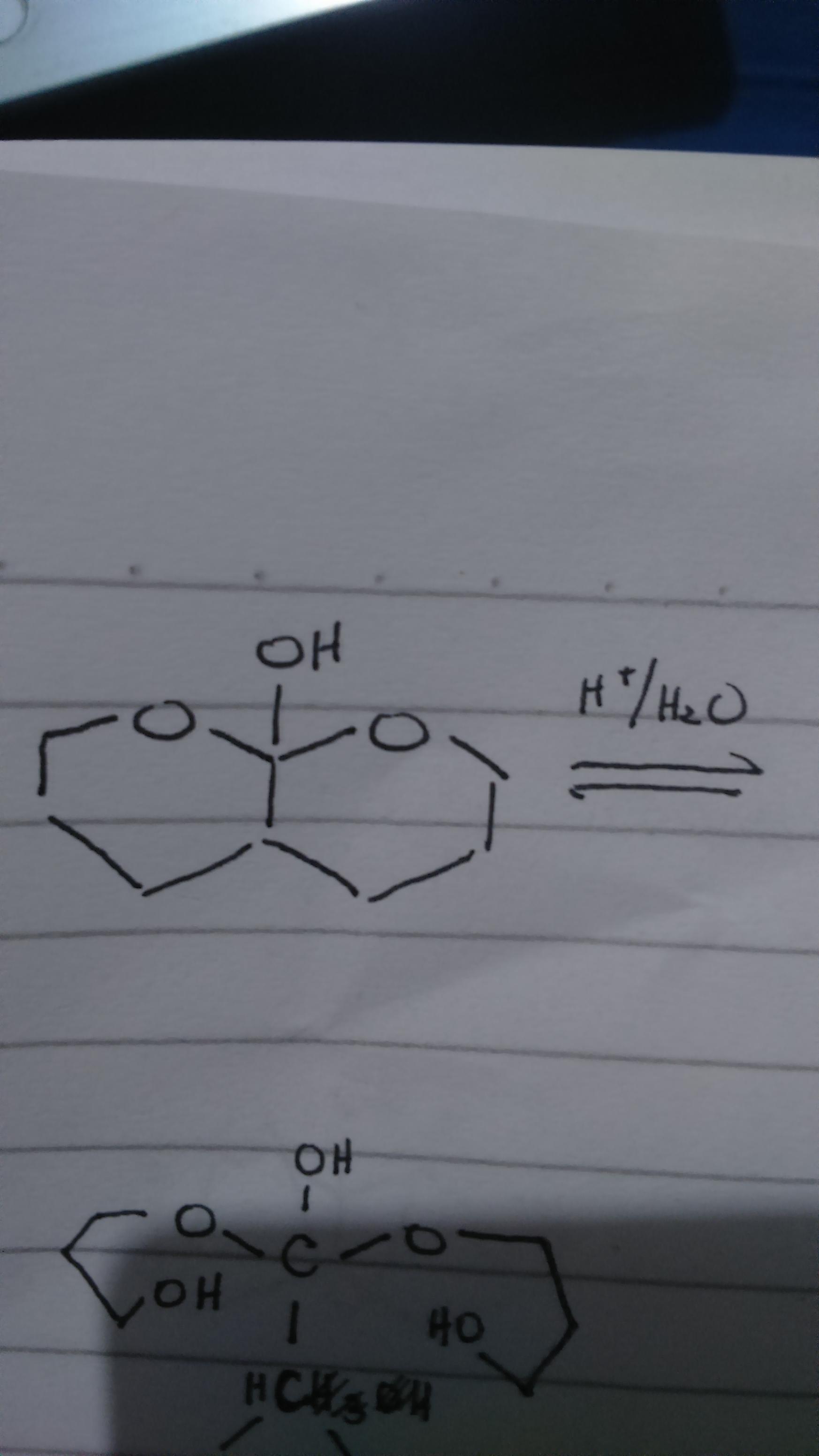 Our topic was about ketones and aldehydes (carbonyl group) including hemiketals and hemiacetals and he asked us to do a homework. I cannot find an answer to this one.Please explain me the reaction and the product formed.

PS: The figure at bottom is my best effort to do this question.

But.....6 member lactones are super stable so I wouldn't be surprised if only 1 ring opened/ some recyclized

You mentioned ketals, acetals, hemiketals and hemiacetals.
Let's have a look at some structures (1 to 5).

What do they have in common?

Apparently, 1 to 5 each have one carbon atom with two single bonds to oxygen atoms. In 1, this central carbon atom bears a hydrogen atom (omitted in the drawing). Do you recognize that 1 is a "masked" aldehyde? 2 and 3 are apparently different. The central carbon atom, the one with the two oxygen atoms, bears single bonds to two other carbon atoms. 2 is made from cyclopentanone, 3 is made from cyclohexanone. When the protecting groups are split off in 1 to 3, they are gone and no longer a part of the molecule with the rebuild $\ce{C=O}$ group. But it mustn't always be like that. Take a closer look at 4 and 5 and figure out what will happen to them under acidic conditions. Will there be $\ce{C=O}$ and $\ce{OH}$-groups in the products?

Now have a look at the structures 6 and 7.

Are these different from 1-5?

Apparently, they are! Each has one carbon atom with three single bonds to oxygen atoms! You will conclude that these are not the acetals that we worked on above. Under aqueous acidic conditions, the central carbon will not be converted to an aldehyde or ketone, but to a […]. On the other hand, 4 and 7 do have something in common when it comes to the question whether the "protecting groups will still be found in the product ;-)

Not the answer you're looking for? Browse other questions tagged organic-chemistry homework carbonyl-compounds or ask your own question.

8
Why is in the reaction of cyclic unsaturated aldehydes with hydrazine and hydrogen peroxide the aldehyde preserved?
5
Does the Clemmensen reduction reduce the C=C bond of α,β-unsaturated ketones?
7
Are groups other than carbonyl reduced by Clemmensen reduction?
3
Acidity of aldehydes and ketones and enolate formation
4
Can enamines be formed from α,β-unsaturated ketones?
0
Oxidation of Unsymmetrical Ketones using Selenium Dioxide