I am working with the following kinetic scheme that represents pyrolysis of a biomass particle:

The paper that discusses this scheme provides the following rate constants:

where $\delta$ is a deposition coefficient reported as 1.45 in the article. Note that all components of the system are on a mass basis such as $\mathrm{kg/m^3}$. 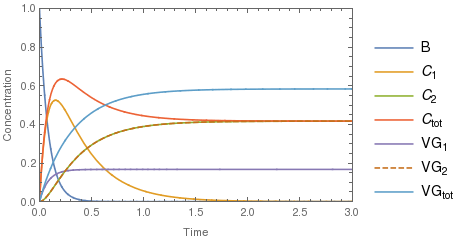 Not the answer you're looking for? Browse other questions tagged kinetics computational-chemistry or ask your own question.

5
Analytical solution to first-order rate laws
4
Conservation equation in an enzyme-catalysed reaction
2
Quasi-steady state hypothesis application
2
Determination of the integrated rate equation for a reaction
5
How to derive the rate laws for three consecutive reactions?
1
Solution of a first- and second-order consecutive reaction scheme
5
Example of chemical reaction with a given form for the kinetic equations
4
Can anyone explain, why there are coefficients 2 in the equation for rate of change [A]?
5
Steady-state approach - how to find rate equation for intermediate?