How to calculate the formal charge of sulfate ion?

I found a site with this formula if you will,

But, wait! A more fundamental question might be "How can the sulfate ion have two very different structures that puts different formal charges on the sulfur and oxygen atoms?"

Formal charge is a nice bookkeeping mechanism, but has no experimentally valid relationship to the actual charge on any atom in most molecules or ions. Formal charge only equals actual charge on monoatomic species. Formal charge falls into the category of models that we use in chemistry that are 1) helpful, 2) produce the correct answer when used correctly, and 3) completely bogus. Other models in this category include oxidation number, VSEPR, resonance, and electronegativity. The experimental evidence suggests the real structure of sulfate combines features of both structure #1 and structure #2, but would be challenging to draw using the formalisms we have adopted:

Ben Norris' answer is excellent. I'll collaborate with a more visual procedure, so it may provide a different point of view.

Instead of applying an equation directly, draw the Lewis structure of the compound. Now cut all covalent bonds homolytically, i.e. evenly distributing the two electrons between the bonding atoms. Now count the number of electrons attached to each atom, and subtract the number of valence electrons the free atom has. The number you obtain will be an "electron excess", which is the opposite of the formal charge, so just multiply by -1. Here's your example worked out. 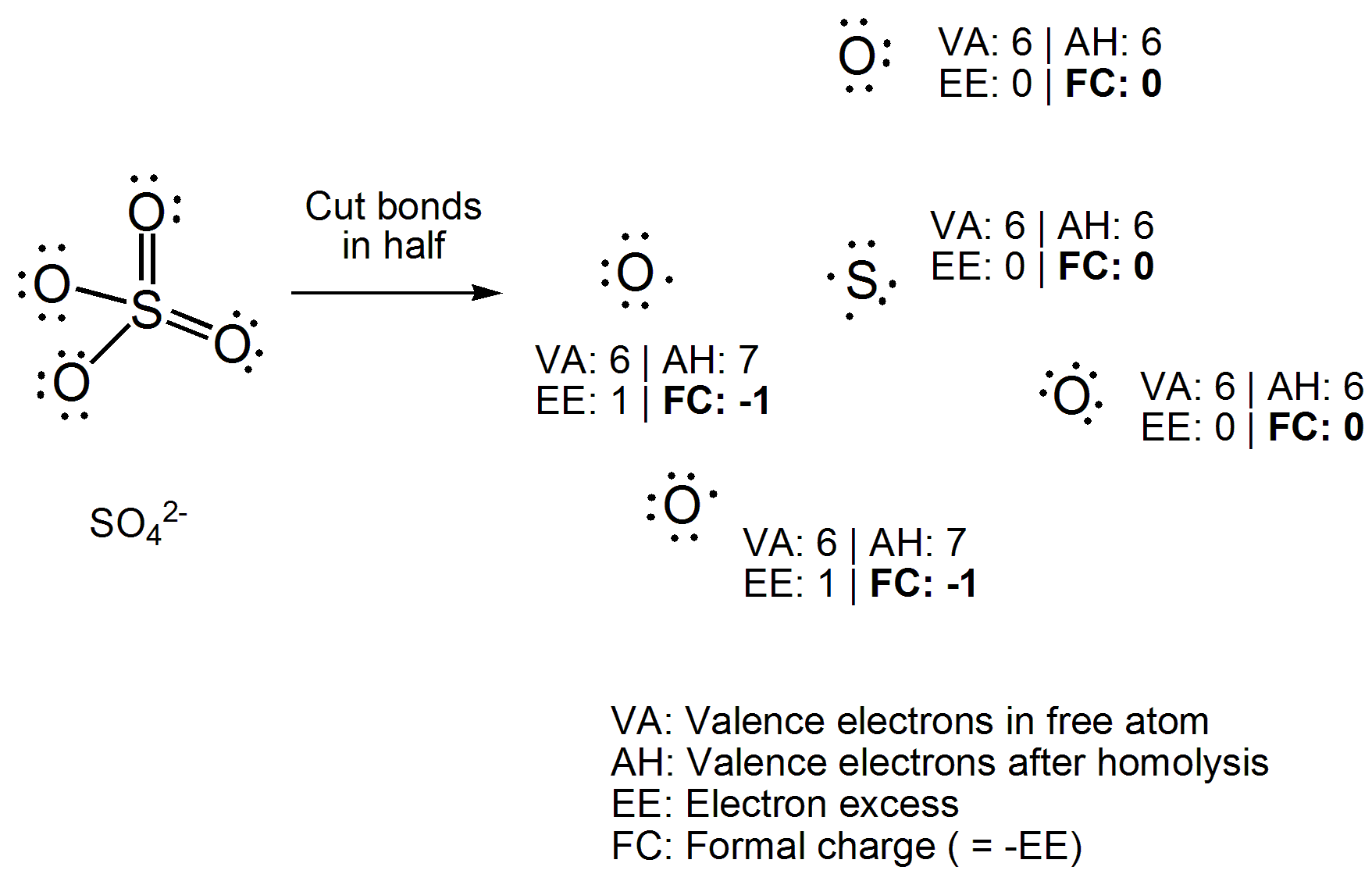 7
The definition of formal Charge
7
Shape and polarity of the iodate ion
5
Why do charges result on atoms when coordinate bonds are formed?
2
Formal charge and valence shell
1
How to explain the structure of HNO3 with a Molecular Orbital diagram?
-8
why is nitrogen positive in HNO3?

8
The Crisscross method for finding the chemical formula
3
What to do when there is an odd number of valence electrons left on the the central atom?
1
How to explain the structure of HNO3 with a Molecular Orbital diagram?
3
Rules to identify the most stable resonance structures
1
Compounds with aluminum and nitrogen atoms directly bonded to each other as part of an aromatic ring?
4
What is the n-factor for reduction of chromate(VI) to chromium?