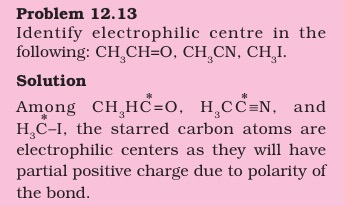 In all of the compounds illustrated, the starred carbon is connected to a more electronegative element.

Let's examine this one by one- I shall begin with methyl iodide. Here, the starred carbon is connected to a Iodine which is more electronegative, thus naturally, we can guess that the electron density shifts towards the halogen. Thus, the carbon in question is slightly electron deficient (slightly positive or electrophilic)

Now, let's look at the examples with the multiple bonds. Consider ethanal: the carbon is again connected to a more electronegative atom i.e oxygen. So, if you were to cleave the pi bond, the electron density would shift to the oxygen, and again you are left with an electrophilic carbon right next to the oxygen.

The same can be said for the acetonitrile: the electron density shifts to the more electronegative element i.e nitrogen and the carbon right next to is left "slightly positive" or electrophilic.

The electron density would always be slightly greater in the vicinity of a more electronegative element across a bond between two atoms differing in electronegativity (essentially, what we mean when we say a bond is polar)

4
SN2 nucleophilic attack with alpha unsaturation
8
Addition of HBr to Vinyl bromide
2
Nomenclature of a poly-nitrile
7
Reaction of propylene oxide with ammonia or hydrazoic acid
4
Deciding more electrophilic centre between ester and thioester for SN type reaction
5
What is an aromatic alcohol?
2
Why does Oxygen act as Nucleophile over here?
0
What is the order of basicity of amines?