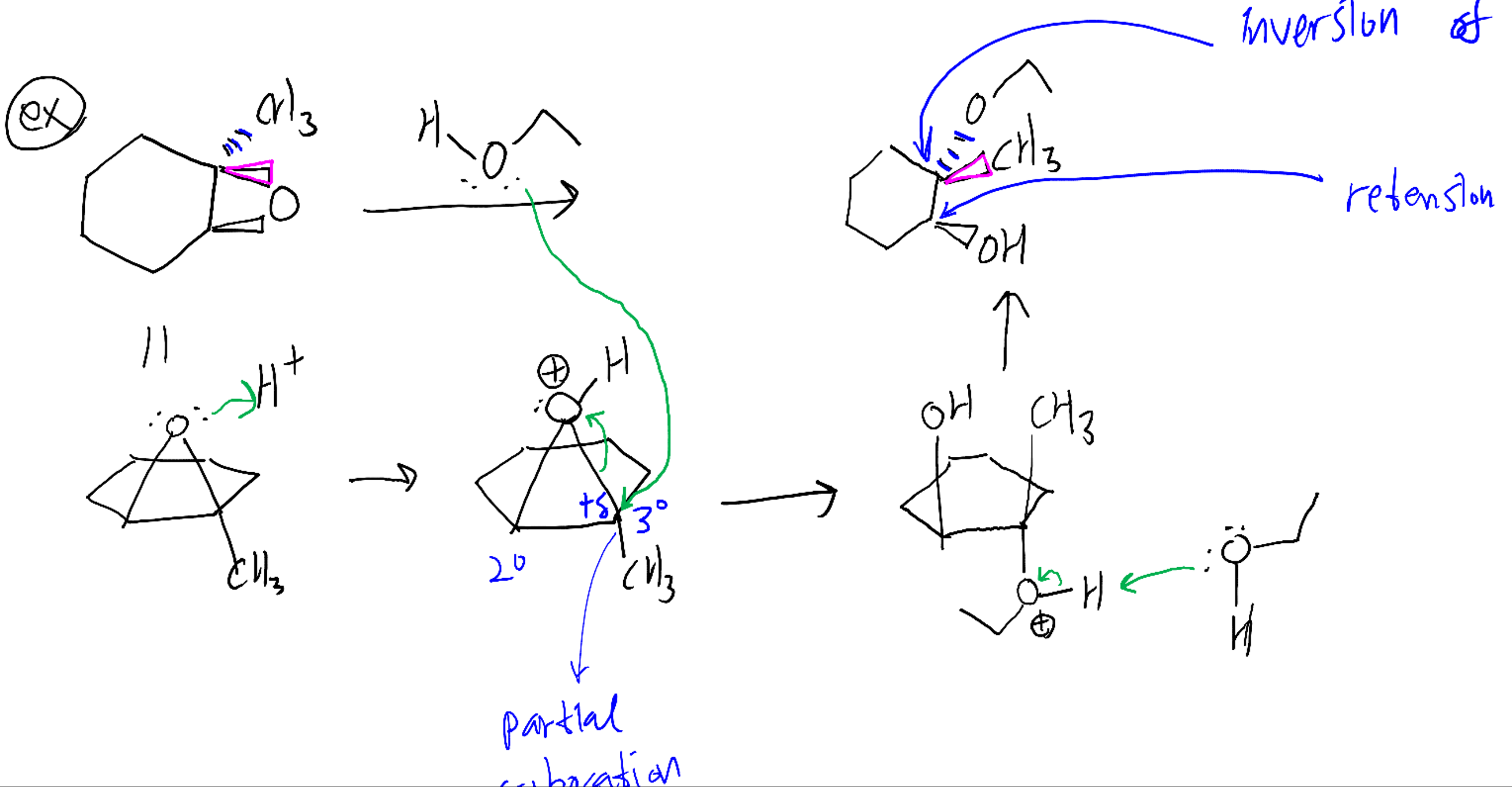 I have some questions about the mechanism above:

Ring-opening reactions can proceed by either SN2 or SN1 mechanisms, depending on the nature of the epoxide and on the reaction conditions.

If the epoxide is asymmetric, the structure of the product will vary according to which mechanism dominates.

When an asymmetric epoxide undergoes solvolysis in basic methanol, ring-opening occurs by an SN2 mechanism, and the less substituted carbon is the site of nucleophilic attack.

In the case of acid catalysed ring opening, the mechanism is not exactly SN1 or SN2. It is a hybrid of both.

In the first step, the oxygen gets protonated.

Second step the C-O bond starts to break ( the C with more alkyl substituents is preferred for cleavage of C-O bond. In your case the tertiary carbon atom is preferred to the secondary C atom)

Third step the nucleophile ( or alcohol in this case) attacks the electrophilic carbon (the C with which C-O bond is still breaking). Unlike in SN1 mechanism the reaction does not wait for the carbocation to be formed completely. The incoming nucleophile attacks the carbon from a direction opposite to that of direction of C-O bond because C and O are still bonded to some extent.

So hence the mechanism proceeds similar to what you have shown. In acid catalysed ring opening the nucleophile attacks the more substituted carbon because this carbon has more fractional positive charge then the secondary one.

Not the answer you're looking for? Browse other questions tagged organic-chemistry homework reaction-mechanism or ask your own question.

48
Regioselectivity of acid-catalyzed ring-opening of epoxides
6
SN1 reaction of ethanol at tertiary alkyl halide
2
Why should epoxides be more reactive at a position where positive charge is stabilised?
2
Rate Expression for Reactions Involving 2° Benzylic Alkyl Halides
1
Isn't the mechanism of aqueous sodium hydroxide and 1-bromobutane involves both heterolytic bond fission and attacking by a nucleophile?
8
Comparison of rate of dehydration of primary, secondary & tertiary alcohols on cyclohexane
0
Reaction of urea and thiourea with nitrous acid
1
Mechanism involved in bromine water test