What are the height and width of the large and small nodes of the sp3 hybridized orbitals of carbon and silicon?

I will make an effort to interpret answers based on wave functions, but I am a senior pursuing a bachelor's degree in Biology, so I don't have the background in quantum physics for a purely mathematical answer to make intuitive sense.

I would appreciate any partial answers which cover only carbon or only silicon, as well as partial answers that give the height and width of only the small node or only the large node of the sp3 orbital. I am asking about the width of the large and small nodes at their widest points, not at their center of electron density.

I am aware the sp3 hybrid orbitals only form when these atoms are bonded to four other atoms, so there are no empirical observations showing the height of sp3 orbitals from isolated atoms (for this question, assume a tetrahedral lattice composed purely of carbon or silicon). That said, any estimates based on halving bond lengths should account for orbital overlap in these bonds so that the height of the orbital from each bonding atom is not underestimated.

Pieces of information that I would find very useful as an addendum to answering my main question are estimates of the electric potential energy, kinetic energy, and total energy (constant) of an electron as it travels in the largest ellipse contained within the sp3 orbital of either a carbon or silicon atom in a lattice – including the large and small nodes, and assuming this ellipse does not move from one bonded atom to another.

EDIT to update: Having taken organic chemistry I and II, I am also aware that orbitals are simply the 95% confidence interval for finding an electron. I am also aware that the common understanding of electron movement in orbitals is that they can move between states of equal energy without occupying all of the states in between. In my question about an electron moving in an elliptical path, I am asking for answers to assume that the electron is following such a path, and that this path is a planar ellipse which corresponds to a cross-section of the outer edge of the 95% confidence interval. Smaller elliptical paths would have lower energy, and I'm asking this because it is the highest energy path an electron would take in the orbital if it were following a planar elliptical path.

So, after I get past the shock and awe that you are asking us to describe a fictional object,

this page has some pictures which will be suitable for you to construct visualization: 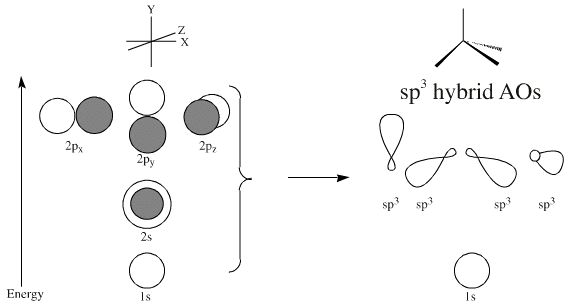 I eyeball it as about 4 times larger in all three dimensions for the 2s/2p level. The radial distribution function for 3s/3p has its highest density about 2.2 times further away from nucleus as the 2s/2p level 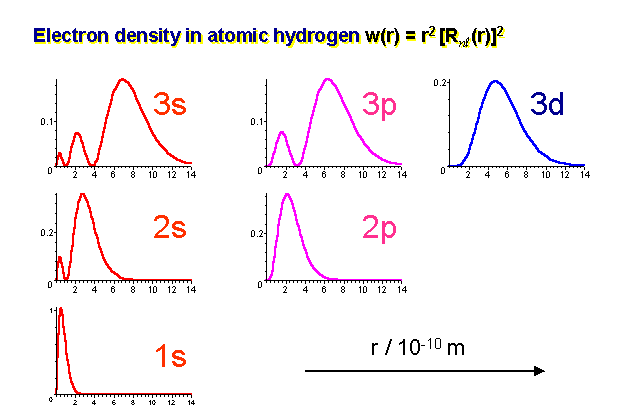 34
When is it true that more nodes equals higher energy?
11
What actually is the Wavefunction?
12
How do Electrons Cross Nodes in Orbitals?
4
sp2 hybridized carbon versus sp3 hybridized silicon
3
What are the physical manifestations of radial nodes?
10
Is there a physical explanation why benzene's pi molecular orbitals in a Frost circle are degenerate but pyridine's are not?
1
Electron configuration of non-hybridized carbon
1
Radial node in p or d-orbital