According to me the answer should be (c),(b),(a),(d). As we move left to right in a period the electronegativity increases and hence the tendency to donate electrons will decrease so nitrogen is better electron donor than oxygen. Now to select between three oxygen donating species we can use the steric hindrance concept and hence my answer.

Please tell me what is my mistake.

organic-chemistry nucleophilicity
Share
Improve this question
edited May 29 '20 at 14:29

The first thing to note is that nucleophilicity is a kinetic parameter that cannot be addressed easily with thermodynamic parameters such as electronegativity. Instead, you need to inspect all potential nucleophiles by their kinetic merits.

One easy thing that we can use, even though it is thermodynamic, is the effective charge. The centre of negative charge of the acetate molecule is somewhere in the middle between the two oxygens and that of tosylate is somewhere in the middle between three equivalent oxygens. Also, in both systems the oxygens are bound to very highly oxidised atoms ($\ce{C^{III}}$ and $\ce{S^{IV}}$, respectively), which greatly reduces their electron density and thus their desire to attack nucleophilicly. Finally, in acetate’s case the nucleophilic attack would reduce the effectiveness of the carboxylate resonance as one of the two mesomeric structures becomes disfavoured (charge separation) which adds another grain of salt against nucleophilic attacks.

Tosylate is less nucleophilic than acetate because there are three oxygens than two but they only bear a single negative charge between them.

Now onto cyanide and methanolate. For cyanide, first note that it is both $\ce{C}$-nucleophilic and $\ce{N}$-nucleophilic. Since the HOMO, the highest occupied molecular orbital, has a much larger contribution on the carbon side, the $\ce{C}$-attack is strongly favoured over $\ce{N}$-attack and we can ignore the latter.

We can again use the bond-partners argument here. The oxygen of methanolate is bonded to a $\ce{CH3}$ group which, in general, is electron donating, thus increasing its electron density. The cyanide carbon, however, is bonded to the more electronegative nitrogen which slightly reduces its electron density. Thus, we can infer that methanolate should be a better nucleophile than cyanide. (Note, however, that both are very good nucleophiles, especially when compared to the other two.)

The conjugate base of a weak acid is going to be a strong base/a good nucleophile, so when looking at the two nucleophiles above $\ce{CH3O-}$ and $\ce{CN-}$ we should consider the pKa values for methanol and cyanide. We can see that the pKa of methanol ($\ce{CH3OH}$) is 16 and the pKa of cyanide ($\ce{CN}$) is 9.1 therefore the methanol is going to be a better nucleophile since it is the weaker acid and it will want to regain its proton after donation or stabilise its charge by attacking an electrophile. I would agree with you on bulky steric effects with (a) and (d) but you should also consider the fact that resonance stabilisation makes for a better acid so that would also decrease their nucleophilic properties with (d) having the most resonance structures therefore having the lowest nucleophilicity, due to strong acids having weak conjugate bases. 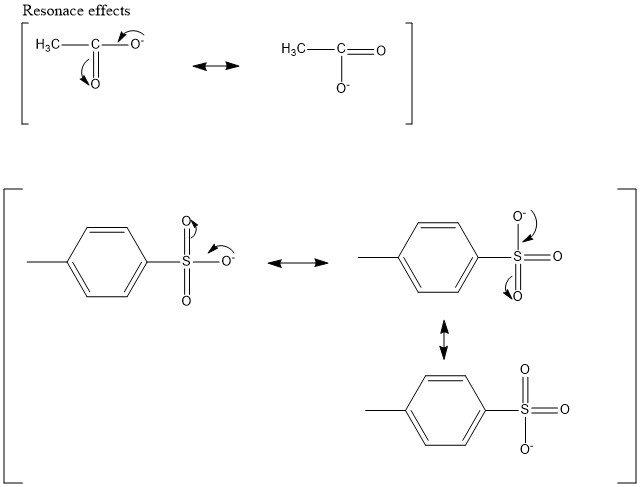 Not the answer you're looking for? Browse other questions tagged organic-chemistry nucleophilicity or ask your own question.