Photoionisation microscopy of hydrogen - where are the p orbitals?

In this Physics Review Letters article, which was published in 2013, but I found recently, the authors report photoionisation microscopy images of hydrogen atoms in various electronic states.

Here are some non-paywall summaries of this work:

The imagery is compelling: 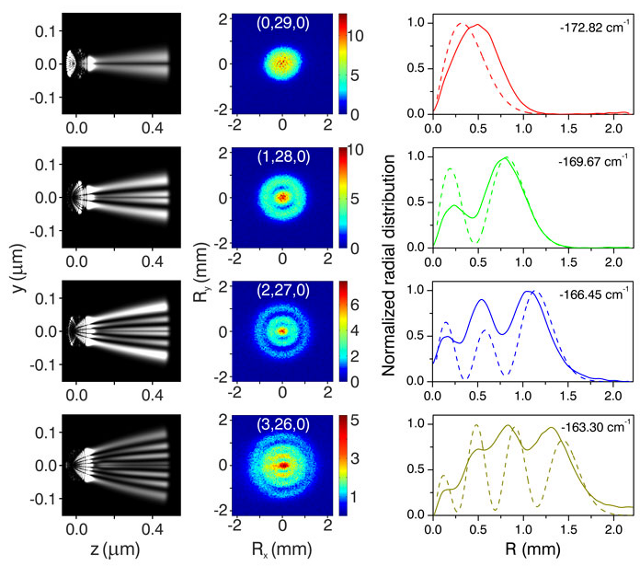 The solutions to the Schrodinger equation for hydrogen-like orbitals include wavefunctions corresponding to $p$ oribtals. Why did the authors not observe images that appear to look more like the $p$-orbitals?

These states aren't 1s, 2s, 3s, 4s, like you suggest. These are actually highly excited states of hydrogen. Note the negative energies in wavenumbers (cm$^{-1}$) in the rightmost column of the figure you provide. This is how much lower in energy the states are relative to the ionization limit, 13.6 eV, so we are talking about excitations ~13.57 eV in energy above the ground state. In fact, these energies are so high they refer to them as "quasibound" states.

The states the authors are looking at Stark states (the experiment is done in a field of 808 V/cm). So the analytical results they compare to are the solution of the hydrogen atom in parabolic, rather than spherical polar coordinates. This is why the quantum numbers given in the middle column are a bit funky. So the (0,29,0) does not mean $n=0$, $l=29$, $m_l=0$ (as I'm sure you can see why!) The quantum numbers define the state in parabolic coordinates, so the numbers are ($n_1$, $n_2$, $m$).

The reason they do this is that parabolic coordinates are still separable (so you can solve it analytically) when an external electric field is applied along some axis. Spherical coordinates, on the other hand, are not. So you don't see pure s, p, d orbitals (as nice as that would be!). My math gets a bit rusty here, so maybe some one else can add to this, but I believe the images you see on the left and the middle column are actually linear combinations of the spherical solutions we are used to as chemists. In fact, there is a line in the paper that in the experiment they prepare their states by exciting to a mixture of $s$ and $p$ states.

I believe you can connect the parabolic and spherical solutions in an electric field by a unitary transformation if the field is weak enough, since you can get the Stark effect in spherical coordinates by perturbation theory.

Hopefully that helps clear things up a little bit. I'm not an atomic physicist, so I'm often confused by some of the language and tools they use. There is a nice Wolfram Demo on the hydrogen atom in parabolic coordinates with and without an external electric field you may find interesting here:

Not the answer you're looking for? Browse other questions tagged spectroscopy electrons orbitals hydrogen or ask your own question.

18
Why are there multiple lines in the hydrogen line spectrum?
13
Which orbitals of the hydrogen atom are degenerate for n=3?
3
Are the energies of orbitals that are not filled in an atom, equal?
1
Are electron orbitals in a helium atom degenerate?
3
What are Orbitals?
0
Why does STED microscopy cause photodamage?