In a lecture, teacher said

but I saw the picture below from another source. 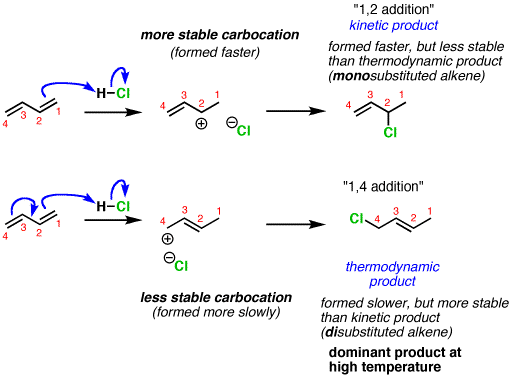 Here, both pathways start with an acid/base reaction (it's about basicity) and then nucleophilic addition happens (it's about nucleophilicity). as a result, 'kinetic' and 'thermodynamic' product come up.

So here's my question.

Are the terms 'thermodynamic' and 'kinetic' that are used above in two cases different?

The terms are used in a different context to mean slightly different things.

The kinetic product of a reaction is the one which is formed the fastest. In the case shown above this is the 1,2 product which results from formation of the most stable cation, which has a lower activation energy for formation.

Nucleophilicity is often referred to as a kinetic property because it has to do with how well a species can attack an electrophile and is affected by factors such as steric hindrance.

Basicity is often referred to as a thermodynamic property because it is to do with the position of the acid-base equilibrium: $$\ce{B + H+ <=> BH+}$$

I want to point out that the two cations you show in the diagram are not two separate species, but rather two "resonance structures" of the same cation. Kinetically, it appears that chloride attacks preferentially at the more highly charged carbon atom, to give the so-called kinetic product.

3
Bromination Pathways with alkane, alkene, and alkyne substrates
5
Stereoselective enolate formation with different bases: Does the addition of a base NR3 to a ketone affords the cis or the trans enolate?
14
Thermodynamic and kinetic products - carbocation stability
3
Nucleophilicty and Basicity of OH and F
5
Thermodynamic vs kinetic reaction control with radical substitution
3
Meaning of the term "Activation of alkene"