Why can a face-centered cubic lattice not be redrawn as a body-centered tetragonal lattice? 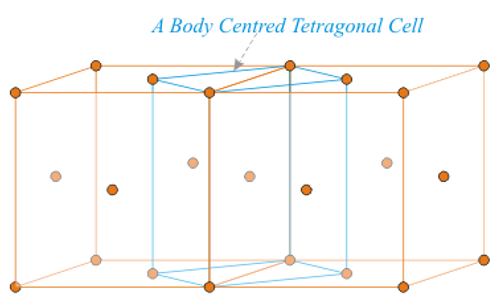 OK, let's get it straight. A lattice is just a periodic set of points. For the sake of brevity, I'll talk about 2D lattices; trust me, with 3D it is pretty much the same, only more complicated.

Initially the lattices were just like that: periodic patterns of one infinitely repeating parallelogram, called the unit cell. Other than that, they were without form, and void; and darkness was upon the face of the deep. The very word "centered" was not invented yet.

Then people started to categorize lattices by symmetry.

You see that the first one of these has no symmetry to speak about (other than the $180^\circ$ rotational symmetry, which all 2D lattices have by birthright). The link above calls such lattices "oblique"; I don't like the word, but whatever. The second one has mirror symmetry with respect to the lines running along the sides of the cell; this is an example of so-called "rectangular" lattice. And the third one has mirror lines along the diagonals of the cell. This just does not sit well with us; we'd rather have them along the sides. (We will meet these diagonal mirror lines later anyway, when we'll deal with the tetragonal and hexagonal lattices; but that's another story.) So we select another unit cell, twice bigger in area than the original, and call it centered. 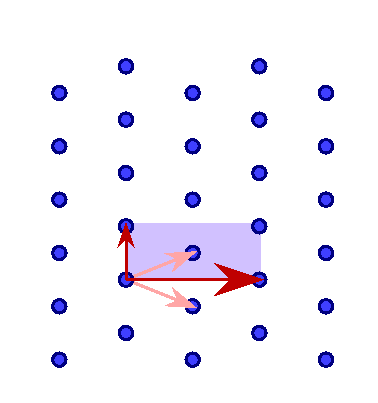 See, the lattice (i.e., the arrangement of blue dots) is still the same; we couldn't and didn't make it more symmetric, or less symmetric, or in any slightest way different, for that matter. We just started to think of it in a different way.

And so the centered rectangular cell entered the list of 2D Bravais lattices. See, it did not get there because it can't be decomposed into some primitive cell (it surely can, as any centered cell can), or because other cells can't be centered (they surely can, only it would make no sense). It is there because we wanted our symmetry elements to be aligned in a certain way.

Like I said, in 3D we have the same story, only somewhat more complicated. Indeed, the face-centered cubic cell can be thought of as body-centered tetragonal (and also as some primitive non-centered cell, too); it is just that the cubic cell has 4-fold rotation axes running along all sides, and in a tetragonal cell some of them would run diagonally, which is not considered comme il faut.

My apologies to those who think they'd be better off with the diagonal mirrors and without centering. Anyway, the convention has been in use for well over a century now, so maybe it's not that bad after all.

In one crystallography lecture, the professor mentioned that in some areas of physics all lattices are redrawn to a smaller primitive lattice and none of the centred lattices are allowed. This is obviously mathematically possible.

However, it is often beneficial to have a lattice as symmetric as possible. While obviously the symmetry elements in both descriptions (body-centred tetragonal and face-centred cubic) must be the same by definition — we are dealing with the same arrangements of spheres after all — the cubic lattice immediately gives us a lot more symmetry that we can work with. So the choice is actually to use the smallest lattice with the highest symmetry for easier working.

Now the actual reason that base-centred cubic is not permitted is not that it can be redrawn as tetragonal per se — as you showed, the face-centred cubic can also be redrawn as tetragonal. The high symmetry of the cubic lattice not only requires $\alpha = \beta = \gamma = 90^\circ$ as with the tetragonal lattice but also $a=b=c$ while tetragonal has $a=b\ne c$. This means that in cubic we cannot have any preferential direction; all directions must be equal or else it would not be cubic.

By introducing a centred atom on only one of the faces (without loss of generation I choose the $ab$ face), we have immediately created a preferential direction: $c$ is now no longer equal to $a$ and $b$ even if their values are equal. Thus, we have already lost cubic symmetry and are dealing with a tetragonal base-centred lattice. What we are actually transforming is one tetragonal lattice into another, smaller one. We lose no symmetry.

In face-centred cubic, all directions are still equivalent, since all contain a sphere in the centre of the face. Thus, by turning it into a smaller body-centred tetragonal lattice we would be losing symmetry by making $c$ unequal from $a$ and $b$ — this is not desirable.

The first problem is with your starting argument : The problem with the "base-centered cubic lattice" is that it is not a cubic lattice! Cubic symmetry means the presence of 4-fold and 3-fold symmetry at the same time (3-fold in the space diagonal of the cube). You cannot have only centering on one face and 3-fold symmetry. Thus a hypothetical "base-centered cubic lattice" has only 4-fold symmetry and is thus a tetragonal lattice (and can be re-drawn as such without loss of symmetry). Please remember, that the crystal lattice is defined by the symmetry present, not by the random metrics of the axes!

To answer your question: all centered cells can be - trivially - redrawn as primitive cells without loss of symmetry. However, there are always additional conditions to these cells to keep the higher symmetry available in the centered cell.

a tetragonal body centered lattice can be dimensionally equivalent to a face centered cubic lattice but under cubic symmetry a=b=c while under tetragonal symmetry a=b but c is unconstrained. so there is only one value of the a/c ratio for the body centered tetragonal lattice that makes the two dimentionally equivalent, just as two crystals could be dimensionally cubes but if one has a fcc lattice it would truly have cubic symmetry(min of 3 four fold axes) while if the other had a body centered lattice it would not truly have cubic symmetry (with only 1 four fold axis) and thus the faces perpendicular to the c-axis could have different properties to the four side faces.

7
Why is a face-centred cubic unit cell not regarded as equivalent to a body-centred tetragonal unit cell?
8
Why are there exactly 5 types of two-dimensional lattices, and what distinguishes them?
5
Why are there only 14 types of Bravais lattices and not 28 when there are 7 types of unit cells and each can have four variations?
2
Crystallographic terminology associated with the honeycomb structure
-1
Simple/ Primitive Tetragonal Bravais Lattice
0
Explain why body-centered tetragonal is a Bravais Lattice, but based-centered tetragonal is not?
1
Primitive cells and their variations

11
Confusion in unit cells of crystal system
3
Hexagonal unit cells
1
How do we know the size of atoms in body centered cubic system?
5
Why do noble metals like silver not form natural cubic crystals?
1
Why rutile structure have primitive unit cell instead of body centered?
2
If a good choice of a unit cell should be the one of most symmetry ,then why keep body centered tetragonal if face centered cubic exists?