In H3PO3 only only 2 hydroxide groups exist, instead of 3. If there is 3 hydroxide group, the phosphorous will have 1 lone pair electrons, which will still satisfy the valence electron of Phosphorous.

The two isomers you're referring to both exist and are in equilibrium: 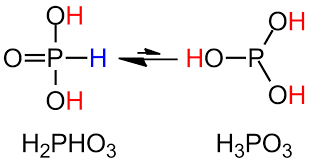 When only one or two protons are removed, resonance stabilizes the anions formed, e.g. the $\ce{HPHO3^-}$ anion:

The trianion (shown below) doesn't have the benefit of resonance stabilization. This makes removing the third proton much harder.

1
Why is Aluminium Chloride a Lewis Acid if it's an ionic compound?
1
Ammonia and hydroxide ion - Lewis basicity
11
Which is more basic, hydrazine or ammonia?
2
How can I understand the Lewis acid-base interaction of iron(III) and water?
9
Why is carbon dioxide considered a Lewis acid?
2
Acidities of (dimethylamino)acetophenone and (diphenylamino)acetophenone
0
How to use Lewis theory to differentiate between an acid and a base?
0
Reaction between an acid and acid
0
why Ammonia is proton acceptor