Why do tosylation and mesylation of alcohols follow different mechanisms?

Why do the tosylation and mesylation of an alcohol proceed via different mechanisms?

The only real difference between an alkanesulfonyl chlorides and arylsulfonyl chlorides is the $\alpha$-hydrogen. In a mechanistic study of the hydrolysis of methanesulfonyl chloride, the reaction was found to have a very small secondary kinetic isotope effect for $\mathrm{pH}<6.7$, indicating no bond breakage to the isotopically labelled hydrogen and thereby an $\mathrm{S_N2}$ reaction mechanism. 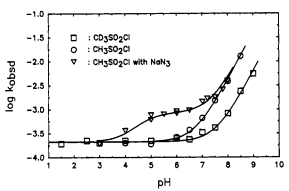 For $\mathrm{pH}>6.7$ there is a large primary kinetic isotope effect, indicating bond breakage to the isotopically labelled hydrogen, corresponding to the formation of the sulfene intermediate.$^{[1]}$ This shows that though methanesulfonyl chloride isn't incapable of direct attack by alcohols, in the presence of basic amines, which serve the additional purpose of driving the reaction to completion by accepting the alcohol proton, it is more quickly deprotonated to form the sulfene.

They have shown that in pH range 6.7-11.8, rate-determining attack by hydroxide anion forms sulfene which is quickly trapped by water. So the Pka of Mesyl Chloride can be said to be 6.7; this is less than the Pka of Et3N at 10.75. So Mesyl chloride will be forming the sulfene intermediate if treated with Et3N. And the SN2 attack by Oxygen happens in both cases, I don't know what you wanted to ask in your first question. Your mechanisms themselves show the attack in both cases by oxygen on the sulfur atom. I hope I am correct in my analogy. Apologies if I am wrong somewhere.

1 & 2. An acid-base reaction can only occur on MsCl, since as you point out it is the only one with acidic alphaprotons. The protons are indeed quite acidic since the negative charge is stabilized by the two oxygens. (pKa ~6.7, thanks @Mrityunjay Gupta)

Et3N is quite basic (pKa ~11), and acid-base reactions will always occur first since they are much faster than other reactions. I'm quite sure the alcohol also attacks the sulfur on MsCl, but the a/b-reaction is just faster. The elimination of Cl- on MsCl follows an E1Cb-mechanism.

Not the answer you're looking for? Browse other questions tagged organic-chemistry reaction-mechanism alcohols organosulfur-compounds or ask your own question.

5
Why do different alcohols have different effects on the brain?
1
Why is the halogenation of an alcohol a multistep process?
0
Reaction mechanisms for organohalides from alcohols
8
Comparison of rate of dehydration of primary, secondary & tertiary alcohols on cyclohexane
2
Ester as a side product in the synthesis of bromoalkane from alcohol. Is it correct?
4
Formation of enamine for unsymmetrical cyclohexanone derivatives