How to compare acidity in the following aniline derivatives? 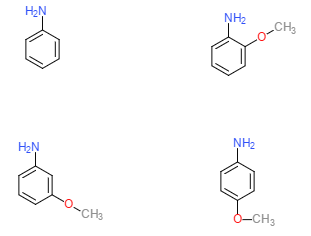 Let the simplest one be a), ortho be b), meta be c) and para be d). I have confusion between ortho and meta. How to compare their acidity?

Taking the case of ortho and meta in which you have confusion:

The acidity of aniline will increase if there is a electron donating group in the compound to stabilise the conjugate positive acid formed.

According to source the pKa values (of the conjugate acid) are:

1
How does hyperconjugation lead to the directing properties of alkyl group?
2
How to rationalise the basicity order of phenylenediamine?
5
Electron withdrawing groups and acidity
4
How is it possible that meta xylene exists?
0
Acidic strength of organic acids. Substituted PhCOOH acids
15
Acidity order of nitrophenols
2
What is the relationship between ortho, meta and para-dimethyl benzene?