Why do compounds like SF6 and SF4 exist but SH6 and SH4 don't?

TL;DR Fluorine is electronegative and can support the extra negative charge that is dispersed on the six X atoms in $\ce{SX6}$, whereas hydrogen cannot.

First, let's debunk a commonly taught myth, which is that the bonding in $\ce{SF6}$ involves promotion of electrons to the 3d orbitals with a resulting $\mathrm{sp^3d^2}$ hybridisation. This is not true. Here's a recent and arguably more understandable reference: J. Chem. Educ. 2020, 97 (10), 3638–3646 which explains this. Quoting:

If not via d-orbital bonding, how does one then describe the structure of $\ce{SF6}$? I'll present an LCAO-MO answer. Here's a "simple" MO diagram (I won't go through the details of how to construct it). It's actually fairly similar to that of an octahedral transition metal complex, except that here the 3s and 3p orbitals on sulfur are below the 3d orbitals. 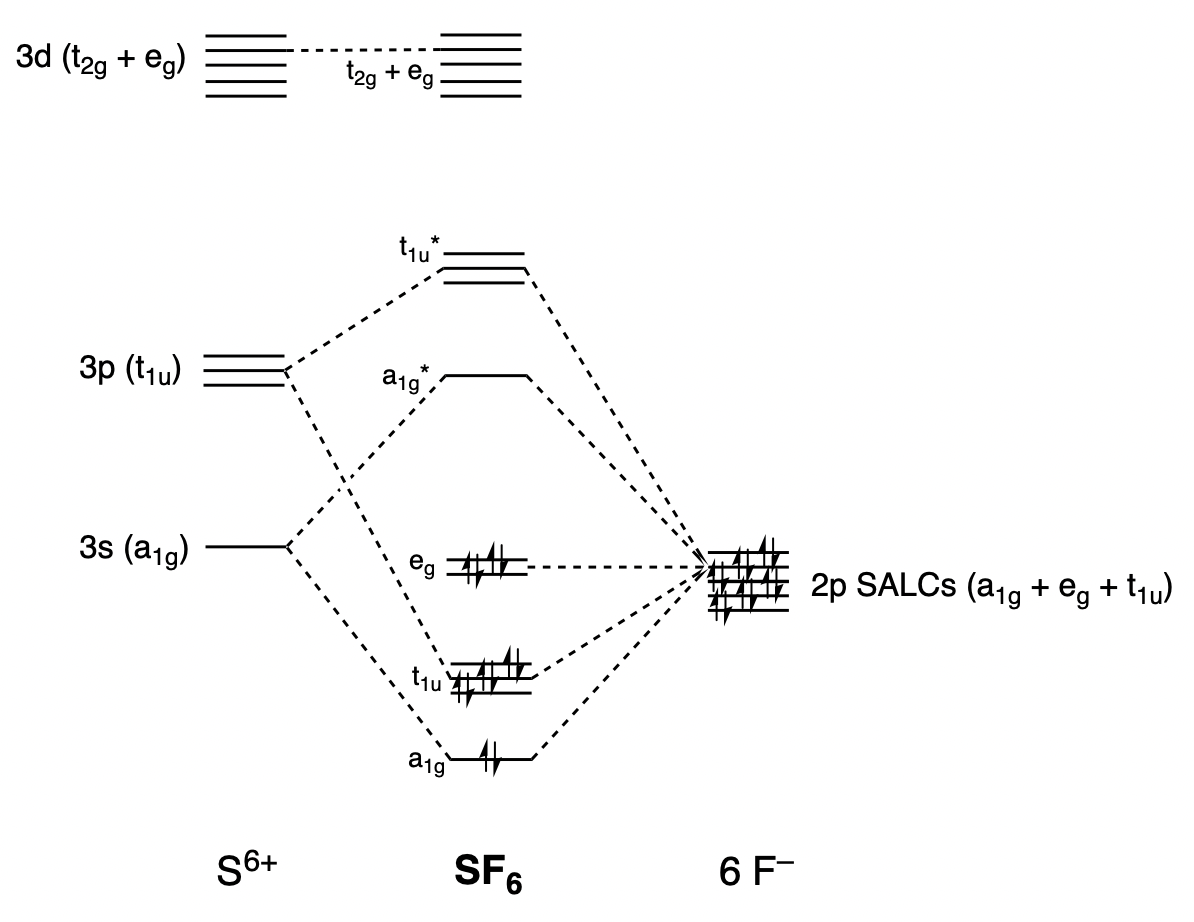 Just for the sake of counting electrons, I treated the compound as being "fully ionic", i.e. $\ce{S^6+} + 6\ce{F-}$. So sulfur started off with 0 valence electrons, and each fluorine started off with 2 electrons in its σ orbitals. I've also neglected the π contribution to bonding, so the fluorine lone pairs don't appear in the diagram.

You'll see that, for a total of six $\ce{S-F}$ bonds, we only have four pairs of electrons in bonding MOs. The other two pairs of electrons reside in the $\mathrm{e_g}$ MOs, which are nonbonding and localised on fluorine. If we want to assign a formal charge to sulfur based on this diagram, it would be +2, because there are only actually four bonds. We could perhaps use Lewis diagrams to represent it this way:

The "hypervalent" resonance form contributes rather little and does not rely on invoking d-orbital participation; see Martin's comment on my answer below for greater detail about the resonance contributions. I am guessing that its existence can be mostly attributed to negative hyperconjugation, although I'm not 100% sure on this. The trans and cis resonance forms are not equal, so their contribution is not the same, but the contribution from each individual trans resonance form has to be the same by symmetry. Overall, the six fluorines in $\ce{SF6}$ have to be equivalent by the octahedral symmetry of the molecule. You could run a $\ce{^19F}$ NMR of the compound and it should only give you one peak.

Right from the outset, we can see why $\ce{SH6}$ is not favoured as much. If we use the same framework to describe the bonding in $\ce{SH6}$, then those "correct" resonance forms that we drew would involve $\ce{H-}$. I'll leave it to the reader to figure out whether $\ce{F-}$ or $\ce{H-}$ is more stable.

Alternatively, if you want to stick to the MO description, the idea is that in $\ce{SH6}$, the relatively high energy of H1s compared to F2p will lead to the nonbonding $\mathrm{e_g}$ orbitals being relatively higher in energy. All things being equal, it's less favourable for a higher-energy orbital to be occupied, and $\ce{SH6}$ would therefore be very prone to losing these electrons, i.e. being oxidised.

In fact, if we do remove those four electrons from the $\mathrm{e_g}$ orbitals, then it's possible that these six-coordinate hydrides could form. But obviously we might not want to have a $\ce{SH6^4+}$ molecule on the loose. It'll probably lose all of its protons in a hurry to get back to being $\ce{H2S + 4H+}$. Is there anything better? Well, there's the species $\ce{CH6^2+}$, which is methane protonated twice. It's valence isoelectronic with $\ce{SH6^4+}$, and if you want to read about it, here's an article: J. Am. Chem. Soc. 1983, 105, 5258. While it's hardly the most stable molecule on the planet, it's certainly more plausible than $\ce{SH6}$.

Now, just to come back to where we started from: d-orbital participation. Yes, there is an $\mathrm{e_g}$ set of d orbitals that can overlap with the apparently "nonbonding" $\mathrm{e_g}$ linear combination of F2p orbitals, thereby stabilising it. It is true that some degree of this does happen. The issue is how much. Considering the fairly large energy gap between the $\mathrm{e_g}$ orbitals, this interaction is bound to be fairly small, and is nowhere near enough to justify a $\mathrm{sp^3d^2}$ description of it; Martin's comments contain more details.

This is caused by the molecule $\ce{SF6}$ being hypervalent, which means that the main element (in this case sulfur) has more then 8 valence electrons.

The reason why this can happen is extremely complex and, to be honest, I am not even sure whether it is a fully solved issue. I do know that the effect is related to the electronegativity of the ligands, which is very high for $\ce{O}$, $\ce{F}$ and $\ce{Cl}$ atoms and somewhat lower for $\ce{H}$-atoms. This might explain why it doesn't happen for hydrogen, but this is just speculation.

The reason that they do not exist (or at least are not the most stable form) is because the decomposition reaction is exothermic.

There is every reason that $\ce{SH6}$ should exist if you are looking at how many "slots" sulfur has. If it has six slots for fluorine, then surely it could accommodate six hydrogens.

I don't really want to get into it, but I tend to think that "hypervalency" is borderline quackery, preoccupation with non-explanation. Either the atoms want to be there because their interaction is favourable electrostatically, or they would rather be in some other configuration.

Hypervalency is a bit of a touchy subject since there are strong opposing proponents for both the hybridization camp and the 3-center-4-electron bond camp.

While not directly related to your question's compounds, I shall point you to a fun book by Errol Lewars on the computational analysis of uncommon molecules: Modeling Marvels. While some of it isn't displayed on Google Books, a good amount of the relevant chapter is there. Indeed it even mentions the theoretical higher hydrides of the second-period elements.

In $\ce{SH6}$ molecule there would be very high electron density around sulfur. This would increase both the electrostatic repulsion of electron and also the kinetic energy connected with occupation of higher atomic orbitals (this is hand-waving argument).

More rigorously it can be explained by a linear combination of atomic orbitals (LCAO), Hartree-Fock method (HF) or density functional theory (DFT). The increased electrostatic repulsion corresponds to Hartree term in HF or DFT. But even more important is the kinetic energy due to Pauli exclusion principle and requirement of orthogonalization of orbitals of each electron (resp. spin pairs). The orthogonalization requires a certain number of nodes in the wavefunction. Each such node increases the orbital energy (similar to states of particle in the box).

From the LCAO point of view this can be viewed as the contribution of higher atomic orbitals (d-orbitals, for example) to the bonding molecular orbitals.

In the case of $\ce{SF6}$ the contribution of sulfur atomic orbitals to the bonding states is lower (because most of the electrons are localized on fluorines). Because of that the energy of bonding molecular orbitals is not increased much by either Coulomb repulsion or by kinetic energy of higher atomic orbitals of sulfur.

As sulfur belongs to group 16 in periodic table, its electronic configuration is ns²np⁴, it can show +2,+4 , +6 and -2 oxidation state. SF6 exists but SH6 doesn't because fluorine is the most electronegative element in the periodic table, its size is extremely small so it has greater polarising power, but if we see in SH6 then we get to know that the electronegativity of sulfur is much more than hydrogen, hydrogen doesn't have sufficient nuclear charge (effective nuclear charge) and its electronegativity is also not much, so SH6 cannot be formed.

Alkalai Metals bond with Sulfur/Chalcogens in a 2:1 ratio and Hydrogen is behaving like an Alkalai Metal.

Na2S adopts the antifluorite structure, which means that the Na+ centers occupy sites of the fluoride in the CaF2 framework, and the larger S2− occupy the sites for Ca2+. -https://en.wikipedia.org/wiki/Sodium_sulfide

Oxygen is really the problematic chalcogen: we are used to the Halogens behaving like hydrogen: See Dioxygen Diflouride and Hydrogen Peroxide. And then Hydrogen goes out and acts like an alkali metal.

Not the answer you're looking for? Browse other questions tagged inorganic-chemistry molecular-orbital-theory halides hybridization or ask your own question.

4
Is ClH7 possible?
0
How can PCl₆⁻ be formed
176
Can an atom have more than 8 valence electrons? If not, why is 8 the limit?
66
Why is it wrong to use the concept of hybridization for transition metal complexes?
31
What is the molecular structure of xenon hexafluoride?
29
What is Drago's rule? Does it really exist?
14
Hybridization of nitrogen in trisilylamine, (SiH3)3N?
7
How are the hybrid orbitals of sulfur hexafluoride shaped?
14
Why only two atoms share an electron and not three?
10
How is the bonding in the [Au6C(PPh3)6]2+ cluster explained?
See more linked questions

56
How do I figure out the hybridization of a particular atom in a molecule?
11
What is the hybridization of the nitrogen in the azide ion?
5
Crystal Field Splitting of d-Orbitals in Octahedral and Tetrahedral Ligand Fields
13
Are carbocations necessarily sp2 hybridized and trigonal planar?
9
MO Theory: Why do hydrogen and lithium bond, but hydrogen and helium don't?
8
The shapes of molecules
8
Does tetrachlorodibenzo-p-dioxin (2,3,7,8) have a nonzero dipole moment?