Can molten aluminium be used to reduce iron oxide (rust) into iron?

Will surface rust on an iron crucible be converted if used to melt aluminium?

Can one convert bog/lake iron ore into iron using molten aluminium similar to the Thermite reaction?

Or perhaps the real question is what temperature would this occur at?

EDIT: I'm hoping one could use the molten aluminium instead of aluminium dust to achieve the same reaction as occurs in the Thermite process. I know about Thermite steel rail and copper earth connection welding. My goal is to reduce rust to iron by sprinkling it (with attendant sparks) onto a molten aluminium surface. Will the temperature be too low in practice or will the iron oxidise or blow off before consolidating? Trials today were inconclusive due to low temperature and small sample size.

Take a look at the Ellingham Diagram. 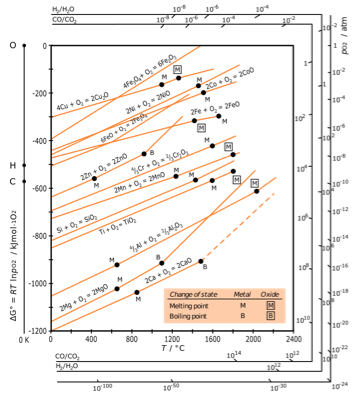 Based on this figure, one would also expect this reaction to be spontaneous at all temperatures.

Additionally, of interest to you would be this paper. Given below is a DSC curve from it 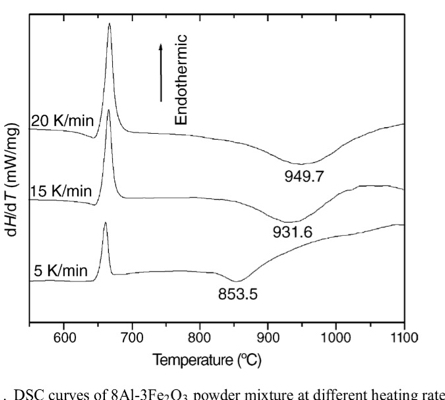 The endothermic peak ca. 660 corresponds to the melting of aluminium, while the exothermic peaks correspond to the thermite reaction.

The activation of the process is reported as 145 kJ/mol, and according to he authors in the study the product is controlled by the diffusion of $\ce{Al}$ in $\ce{FeAl2O4}$

The trick to the thermite reaction of iron oxides with aluminum is the ignition temperature: somewhere over 1600 °C. Since aluminum melts at 660 °C you have to add (and sustain on contact) a lot of heat before it can begin to steal oxygen from rust.

Not the answer you're looking for? Browse other questions tagged reduction-potential or ask your own question.

9
Best ways to start a thermite reaction?
4
How can Ellingham diagrams be linked to Gibbs energies of formation?

1
What else other than zinc can reduce Cr(III) to Cr(II)?
1
Can hydrogen gas reduce copper(II) ion?