Why does increasing orbital energy mean an electron can be more easily lost?

Why is the higher the orbital energy, the easier the electron lost?

Orbital energies are measured relative to an electron at infinity (i.e. one which has been ionized), which corresponds to an energy of 0 eV. An electron which is lower in energy than this (i.e. bound to an atom) has a negative energy. 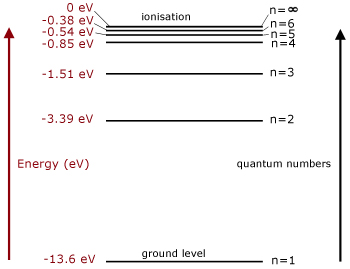 The first six energy levels for hydrogen are shown above. As you can see, the energies converge to 0 as n, the principal quantum number, goes to infinity. In order to ionize an electron it must be given enough energy to promote it to the n = ∞ energy level. Therefore the higher the energy of the electron, the less energy is required to ionize it.

The most likely distance of the electron from the nucleus (the maximum in the orbital's radial distribution function) increases with n and so the electron is in a higher energy orbital and is more easily lost.

See its related to screening effect which is denoted by $Z^*$ and $Z^*=Z-a$ where z is nuclear charge and a is atomic number as distance increases the effective charge of nucleus decreases resulting in loss of electron to attain stability .Higher energy implying farther orbitals . and as distance increases electronegativity decreases down the group like $H>Na$ thus na us more reactive than H where H,Na are hydrogen,sodium

Not the answer you're looking for? Browse other questions tagged electrons orbitals electronegativity or ask your own question.

1
Why can't the energy of an electron exceed 0 eV?

90
Why is the 2s orbital lower in energy than the 2p orbital when the electrons in 2s are usually farther from the nucleus?
6
Why do higher orbitals have more energy?
4
Why does electronegativity create a stronger acid, but so does greater electron distribution?
3
Is there a relationship between an electron's energy and its distance from the nucleus?
1
Why is the energy of an electron always negative?
1
Why does a neutral atom of beryllium not have any electrons in a p orbital?
6
Why is there an orbital angular momentum if the electron isn't properly revolving around the nucleus?
1
Why is orbital energy not the mean between ionization energy and electron affinity when the orbital has two electrons?