Why do the first and second ionizations of a diprotic acid produce the same hydronium ion concentrations in solution?

I was going through Oxtoby Chemistry when I got confused by the following passage in the textbook. It said that "two simultaneous equilibria are involved in the ionization of a diprotic acid such as carbonic acid": 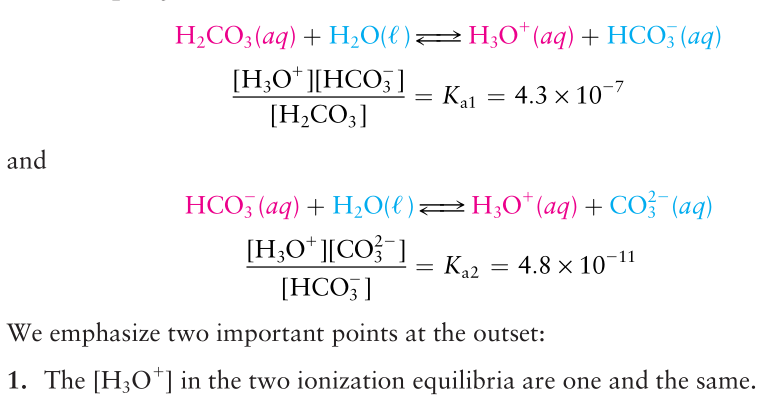 I understand the chemical species for both the first and second ionizations barely dissociate, which means the hydronium ion production is very little.

However, what makes hydronium ion production identical (i.e. important point #1)? Shouldn't the second ionization occur to a lesser extent than the first ionization? Thanks.

This is saying both the $\ce{H2CO3}$ and the $\ce{HCO3-}$ are both donating $\ce{H+}$ to the water to form $\ce{H3O+}$. What it means when it says "The $\ce{[H3O+]}$ in the two ionization equilibria are one in the same" is to say that both of these reactions are occurring simultaneously in the same system, and that there is only one measure of the concentration of $\ce{H3O+}$ for the system.

3
Reversibility of an acid's reaction with water depending on its strength
1
How do we know the concentration of hydroxide ions in this derivation?
1
Comparing first, second, and third ionization energies between atoms
4
Why is the common magnesium ion Mg(II) and not Mg(I) when the second ionization energy is higher than the first ionization energy?
3
How to solve for concentration of two equilibrium reactions with finite equilibrium constants?
0
How to calculate the concentrations of conjugate species present in the solution of diprotic acid?
0
How would a low concentrated acetic acid react with highly concentrated KOH solution of equal volume?
4
How do I quantify the carbonate system and its pH speciation?