Long time it was believed that malonaldehyde and acetylacetone[3] form keto-enol tautomers with symmetric hydrogen bonds. The reason for this is the lack of resolution of the experiments.

I recently came across the article about substituted malonaldehydes.[4] According to this, if you chose R1 to be an amine and R2 a nitro group, you could end up with a single well on the potential energy surface.

However, there is one response, that left me a bit puzzled. Henry Rzepa wrote:

Searches of the Cambridge crystal structure database will reveal quite a number of instances of symmetrical hydrogen bonds. These are mostly homonuclear, ie N…H…N or O…H…O. Years ago, we came across a more unusual example, of an (almost) symmetrical N….H….O heteronuclear example (http://dx.doi.org/10.1039/C39890001722 ).

So apparently there exist many. Unfortunately, he doesn't extend us the courtesy of even a single example. If you look on Google Scholar, you do indeed find a few examples of symmetric hydrogen bonds. However, most of them are either "crystallograpically" symmetric, for charged species, or both.

Also Evangelista et al. conclude their paper about malonaldehydes with the following statement, which leads me to believe, that there is no such thing as a symmetrical hydrogen bond in a neutral molecule:

A remaining goal is the identification of a substituted malonaldehyde with no barrier at all, i.e., a C2v equilibrium geometry.

Since then a few more years have passed, but my search did not turn up any more results.
Do symmetric hydrogen bonds in neutral molecules exist?

molecules reference-request hydrogen-bond
Share
Improve this question
edited May 23, 2019 at 0:40

This question crossed my mind during a lab today because we were making $\ce{Ni(dmg)2}$, which is shown below.

Well first, this is charged in some sense, but it is net-neutral. Also, the configuration shown above is only one way to draw it, and it seems as if everything should be symmetrical and thus that hydrogen should be equally shared between the two oxygens which I believe ought to be classified as a symmetric hydrogen bond on the basis of the fact there must be 4 electrons present here where that hydrogen could be equally shared. As opposed to something like diborane which was being discussed in the comments and is better classified as a 3 centre 2 electron bond.

Indeed, I dug around and found this paper which is quite old but also very interesting! They measure the infrared spectrum of this compound and a related copper compound and find a peak at about $2322\ \mathrm{cm^{-1}}$ which is an absurd shift in frequency from a normal $\ce{O-H}$ vibration. They verify this by forming the deuterated version and finding a large frequency shift down.

They say themselves, "the infrared data interpreted in terms of the abnormal isotope effect indicate that solid $\ce{Ni(dmg)2}$ and $\ce{Ni(emg)2}$ have symmetrical $\ce{OHO}$ and $\ce{ODO}$ bonds."

So then what is this "abnormal isotope effect"? Well, they also studied $\ce{Cu(dmg)2}$ and measured the $\ce{OH}$ and $\ce{OD}$ frequencies. They measured $2382\ \mathrm{cm^{-1}}$ and $2370\ \mathrm{cm^{-1}}$ respectively. Yes, a shift of $12\ \mathrm{cm^{-1}}$ upon deuteration. This effect had apparently been observed before, and the interpretation is that when the hydrogen is present, the hydrogen bond there is symmetrical, but when the oxygen is deuterated, the deuterium bonds more strongly to the oxygen (for some unknown reason to me) and thus is shared unequally which raises the frequency (despite the lowering due to a larger reduced mass).

So not sure if that's exactly what you're looking for, but I thought it close enough to your description to post here.

Obviously what remains to be seen is whether or not this actually corresponds to a single well on the potential energy surface. I would guess that it does simply because of the symmetry present in the system along with the evidence presented above.

Thanks to Martin for running a calculation to see whether or not there is really a single well, and despite some good experimental evidence, he found the hydrogen bond to be asymmetric.

This paper also indicates the same. So alas we haven't found an answer yet.

It appears that perhaps water may have symmetric hydrogen bonds between oxygen atoms, but it would take at least 60 GPa of pressure to make water to bond like that.

Protonated and deuterated ices ($\ce{H2O}$ and $\ce{D2O}$) compressed to a maximum pressure of 210 gigapascals at 85 to 300 kelvin exhibit a phase transition at 60 gigapascals in $\ce{H2O}$ ice (70 gigapascals in $\ce{D2O}$ ice) on the basis of their infrared reflectance spectra determined with synchrotron radiation. The transition is characterized by soft-mode behavior of the $\nu_3$ $\ce{O-H}$ or $\ce{O-D}$ stretch below the transition, followed by a hardening (positive pressure shift) above it. This behavior is interpreted as the transformation of ice phase VII to a structure with symmetric hydrogen bonds.

On the other hand, article "The Hydrogen Bond in the Solid State" mentions:

First example of an $\ce{O-H-N}$ hydrogen bond with a centered position of the proton: pentachlorophenol/4-methylpyridine at 100 K characterized by neutron diffraction studies (...)

Even very small chemical changes in the system lead to loss of the symmetry (...)

In Schaefer's paper,[1] which you linked, the authors describe nitromalonamide as being the compound with the lowest calculated barrier to intramolecular proton transfer, or tautomerisation.

Earlier this month (Feb 2019), Perrins and Wu used NMR isotope shifts to show that nitromalonamide possesses a symmetric hydrogen bond.[2] This is "the first case, to be compared with the FHF− anion, of a neutral species with a single symmetric structure in solution and with a centred hydrogen".

The authors showed this by synthesising a mixture of oxygen-18 isotopologues. It's easier to explain this starting with an example of a hydrogen bond that is not symmetrical, such as 4-cyano-2,2,6,6-tetramethylheptane-3,5-dione, which the authors used. Consider the three possible isotopologues: 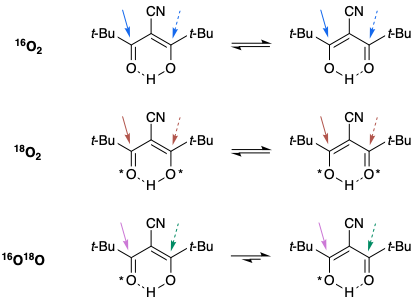 On the other hand, in nitromalonamide, which has a symmetrical double bond and therefore does not exist in an equilibrium of two tautomers, we have a different situation: 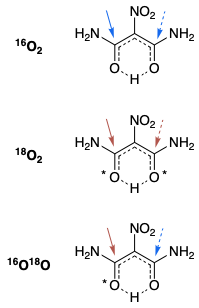 This is, of course, what is seen in the NMR spectra (of all three isotopologues together): 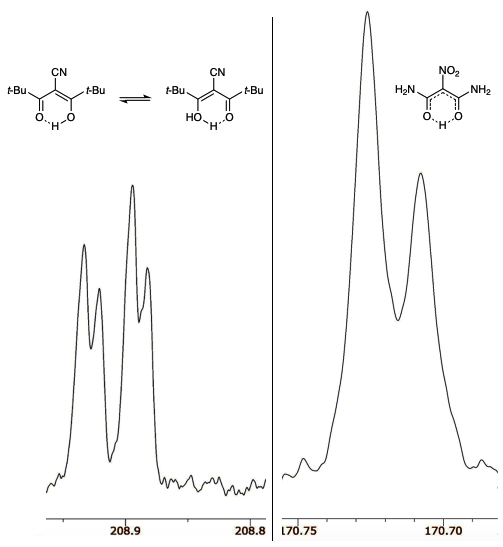 I believe the anhydrous Hydrogen Fluoride ring (HF)6 would be an example. I'm not certain, and can't find proof in literature, but it definitely looks the part! 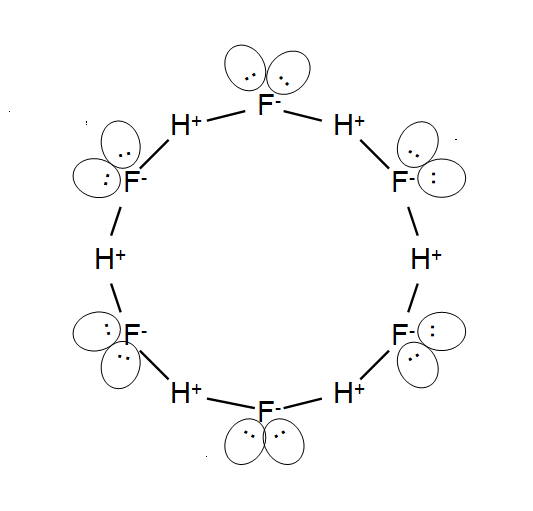 (image was drawn myself)

As we would expect it releases heat when forming from HF, and the reaction 6HF -> (HF)6 has an enthalpy of $\pu{-167kJ/mol}$ according to an experiment by Franck and Meyer as referenced in Fluorine Chemistry, Volume 5 . This is on the order of what we might expect from 6 Hydrogen bonds. The moiety is stable at STP while in an HF atmosphere with a very neutral Gibbs of formation from HF of $\pu{-0.8kJ/mol}$, according to thermodynamics data taken from JANAF for HF and (HF)6. This said, these tables may have some issues, as we're exploring in another question.

In the gas phase, Hydrogen Fluoride also forms dimers, trimers, tetramers, and chains, but I think the example of the ring is easiest to see as an actual neutral bond, and not something akin a Zwitterion.

I'm still hunting for better references on this, but I did find a bulletin quoting a 1921 paper by Langmuir, of all people, saying:

This sounds very akin to what we're hunting for, but interpreting the spectroscopic data would be unfortunately beyond my skill level. The latest and greatest the 1970s had to offer on the topic are listed in this reference on Fluorine compounds by JANAF with (HF)6 on page 152 (1202 as listed), where they provide several references for the spectral lines. Thanks to anyone willing to give it a peak, or who may happen to know better on the topic.

Not the answer you're looking for? Browse other questions tagged molecules reference-request hydrogen-bond or ask your own question.

9
Is KHF2 an ionic compound or a covalent compound?
12
What is the structure of trifluoromethanesulfonic acid in the gas phase?
8
How does one find the probability of tunneling along a reaction coordinate computationally?
4
Strongest hydrogen bond between neutral molecules?
2
Hydrogen + Fluorine Adiabatic Flame Temperature
-1
Which of the following has a stronger hydrogen bonding: F-H- -O or F-H- -F?