Are there any practiced commercial routes for the synthesis of "farnesyl diphosphate"? I'm especially interested in options that would scale to industrial scale processing.

To add some context, there's a bunch of secondary metabolites that branch out from FPP. Assuming one can immobilize the requisite enzyme the next question is whether the substrate FPP could be somehow manufactured at scale using a chemical synthetic route.

Farnesol is commercially available as a distillate of essential oil or synthetically derived from Nerolidol. These chemicals are commonly used in the fragrance industry, as such efficient synthetic processes should exist.

Here's a potential synthesis route for Farnesol (1) from the starting material Nerolidol (2). Farnesol is then phosphorylated into Farnesyl diphosphate. 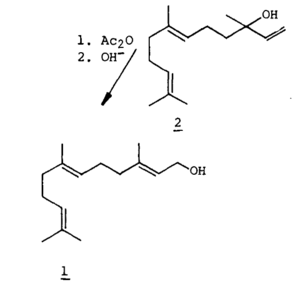 Nerolidol (2) is treated with anhydrous acetic acid under basic conditions to produce Farnesol (1). From The Total Synthesis of Natural Products edited by John ApSimon, page 201. Also referenced in US1663817A.

The double phosphorylation has stated yields from 32%-51%. Let's assume the yield of Nerolidol to Farnesol is 70%. Given the price of Neroidiol is 39 USD/kg†, the least efficient price would be about 174 USD per kilogram. The price of Farnesol is 129 USD/kg†, and Geraniol is 19 USD/kg†. (If one would like to synthesize Geraniol into Nerolidiol, steps are given on page 201 above.)

This is pure conjecture, but should most likely work given that Farnesol is similar to both Geraniol and Isopentenol. Also the reason I included the step from Nerolidol to Farnesol is because Farnesol is too expensive compared to the price of Nerolidol despite being one synthetic step away.

†Prices are quoted from Vigon International, a North American reseller.

Diphosphates (and sulfates) of isoprenoid alcohohols are rather sensitive to hydrolysis. (Back in the days, we gave up further work on sulfates and performed our experiments on biomimetic cyclizations using the acetates until I developed something better.)

To my knowledge, the ammonium salt of (E, E)-farnesyldiphosphate is commercially available on a milligram scale and I wouldn't be astonished if it is only synthesized upon customers' demand.

The synthesis of the diphosphates and their hydrolysis is described in two articles published 1967 in German in Tetrahedron by Rittersdorf and Cramer.