What does dl- mean in nomenclature

I came across the compound dl-stilbene dibromide, and I am confused by exactly what this means. I thought it might have meant a racemic mixture but there is only one chemical structure given. 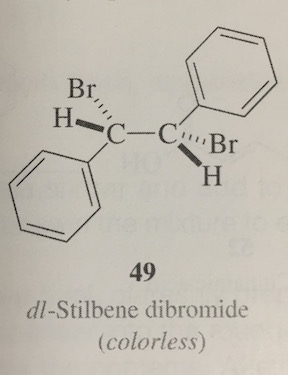 If the S or R labels had been shown in the molecule (or they had used just a d- or l- prefix) the picture would have been showing absolute stereochemistry. By saying dl-stilbene dibromide, they are saying that it is a racemic mixture of the compound shown and its enantiomer, but not any diastereomers.

Here's a snippet with surroundings from the book (Experimental Organic Chemistry – A Miniscale and Microscale Approach), for the context:

Should we accept the name “stilbene dibromide” (which is almost as bad as would be e.g. “ethylene hydrochloride” for chloroethane (ethyl chloride)), there are some other problems.

49 is defined in the text as a diastereomer, but the reaction scheme it's named “dl-Stilbene dibromide”, denoting a racemic mixture (i.e. of both enantiomers), therefore should apply to entire 49 structure including the “(+ enantiomer)” text. (Preferred notation is “and enantiomer” text, or including structure of the other enantiomer, without ‘+’ sign, but that's for the standalone context, here we have a reaction scheme.)

However this is not the case for this book, according to the following example depicting a single enantiomeric product:

It should be also emphasised that dl- stereodescriptor usage is strongly discouraged ((E)- and meso- are OK), the recommended one for racemates is rac-.

5
In Goodman and Gilman what does R,S-citalopram refer to?
23
What does lowercase r-s notation mean?
5
Imine as substituent nomenclature
3
How are t-butyl substituents named according to IUPAC nomenclature?
4
What do 'sigma' and 'pi' in front of ligands in the formula of a coordination compound mean?
1
Is chirality absolute or relative?