(How) Does ICP-OES determine the quantity of detected elements, or just their occurance in the sample?

ICP-OES is a very common analytical method (Wikipedia page here), and I have heard a number of times (from chemists, too) that it is used for quantitative analysis.

However, from the description of the process, I'm not certain if it really does give quantitative information, how it does so, and whether it can do so on its own, or whether there are additional methods run in combination (like with gas chromatography and mass spectrometry) to achieve that result.

Although fp's answer is absolutely correct and I see that you have something more than high school chemistry, I'd like to give a more elaborated, yet simplistic answer, if you or anyone else reading this has any interest on the basic principles of an ICP-OES - you only need high school chemistry to understand it.

First of all the sample must be prepared, you can't simply toss something in it. Depending on what your sample is, it must be mixed with a known amount of this or that chemical (you'll see later why). This answers your next question:

Although the actual analysis and preparation can indeed be done purely by the machine in some cases (here's a video), and there are methods such as laser ablation which make it possible to almost just toss something in the ICP, the know-how of a trained analyst is still require to tell the machine what to do, to interpret the results it outputs, and to tell what chemicals to mix in the preparation process, if there is one at all. Equipments such as gas chromatographs can (and might need to) be coupled to assist in the sample preparation.

Back to how it does so:

When you introduce the prepared sample into the machine (it basically sucks it) some processing is done to it, and at some point it reaches the atomizer - the plasma torch. The atomizer does what it's name suggests: It turns stuff into separate atoms (by heating them to absurd temperatures). Here's a picture I took from an ICP atomizer: 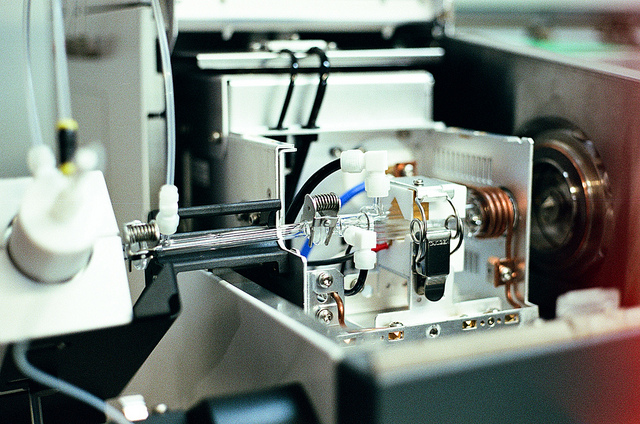 Note: Not 100% of the sample is atomized. In fact, only a small percentage is.

When it's turned on it looks like the picture you saw at Wikipedia. You can see by the size of the parts that only a few milliliters of sample - if not less - is atomized at a time. Now that it got our sample atomized, it heats the sample up just a bit more, so the electrons get exited and go from their current level of energy to a higher one. While the sample passes through the equipment it gets cooler, so the electrons get back to the lower energy level, and by doing so, the atom emits light, hence the name optical EMISSION spectroscopy. 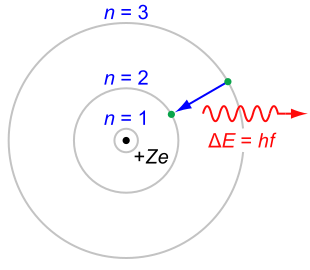 But what elements are emitting light, and at what wavelength? The principle of every spectroscopy analysis is that each element emits and absorbs specific, known, predictable wavelengths ranges, and only when heated to specific temperatures (in the case of emission). Because the temperature was set to a specific one for the analyte and a specific set of chemicals were mixed with the sample, only the atoms of the element we want to quantify will emit light at a certain element-specific wavelength range. We set the equipment to detect only that wavelength range and ignore others and that's how we know how much of that element there is in the sample.

But if you kept track of the proportions you might be thinking: "if it detects ppb amounts in only a few ml of sample where only a few % of it is atomized and only certain elements will emit only a certain wavelength, how the hell can it detect that little light?". That's the photomultiplier's job. It's a fantastic piece of equipment and you should definitively read about it.

After it detects the light emitted by the analyte in the sample, it compares it to a blank, does some calculations and displays the results in the form of a graph. Here's a screenshot of an ICP-OES software: 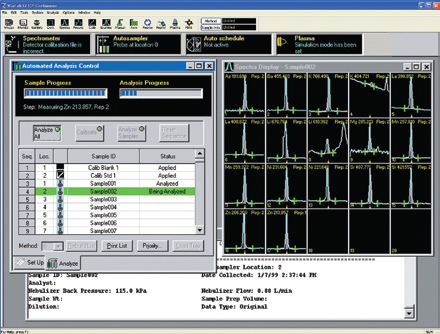 As I mentioned, this is a simplistic explanation, most of the process isn't that simple in reality. So as you can see, it's basically witchcraft.

Quantitative results are obtained by:

2
How are samples prepared for analysis with ICP-OES? Can it analyse gases?
1
What analytical methods are used to quantify C, O, N, and H in a sample?
0
ICP-OES data treatment: correct for dilution and inweight, the units
5
Problem digesting sample for Ti analysis using ICP-OES
1
How to determine the amount of barium in a sample of contaminated water?
3
Does ICP-OES detect molecules in suspension?
1
Calculating amount of base needed to achieve a specific pH in a mixed ethanol-water solvent
1
Methods used to compare two spectra in order to determine the effects of irradiation of sample