Does the para position on benzene ring-polymers make the structure stronger?

Aramid fibers are strong synthetic fibers. Kevlar is called a para-aramid, and it's outstandingly strong. Why does the para-position give Kevlar its strength?

When the Kevlar monomers are in the para-position, will this make the chains closer (shorten the length of the bond), and make strong interactions between the chains?

para isomers fits into the crystal lattice more perfectly than ortho and meta due to steric reasons and hence generally they have more melting point.

In the case of para aramid you can see that the two peptide linkage formed are with two other para amid molecules (always).Had it been ortho aramid then the two bonds will be more likely to get bonded to a single other ortho amid molecule.And the polymeristaion ends there (at the most polymer of para aramid will be having less length and has unsymmetrical structure).But in para amid it can polymerise to any lengh.

These are the two possible polymers for ortho. 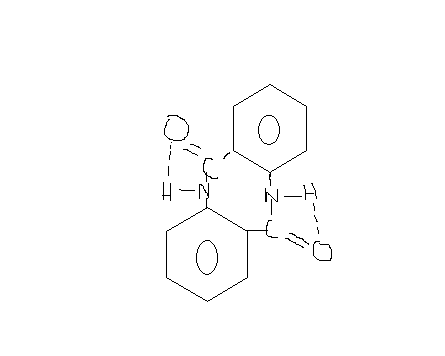 there is no difference in the bond strength formed between two para amid molecule compared to two otho amid molecule after all both are peptide linkages only (i don't know if the ortho aramid exists or not but what will happen is this for sure).(sorry the figure looks completely distorted.I am not really good with the paint application)

finally its the capability to polymerize to a great extent that makes it strong.

Its also worth mentioning that the functional (or substituent) groups at C1 and C4 (C1& C4-carbon numbering in benzene) can't bond themselves,as the bonds in any polyatomic group,can't bend and elongate as they want (after all the distance between C1 and C4 even if we consider diagonally,is itself quite long.And secondly thinking like this insane,say a bond bending in way they want.It will never happen with para compounds.The least may be meta compounds can.)

14
How does epoxy stick to stuff?
3
Inductive effect and bond strength
0
Which is more activating among Phenol, Sodium Phenoxide & Anisole? Also arrange them in increasing order of their activating effect
8
What products do 4-nitrobenzaldehyde and 3-nitrobenzaldehyde give in a crossed Cannizzaro reaction and why?