Apologies if this is not the right forum for this question, I checked the Physics side and there's no questions on this, whereas there's at least one other question here about absorption refrigeration.

I have a very standard camping fridge which runs on the absorption cycle, I'm making a leap of informed guesswork and assuming it's ammonia + hydrogen based.

I'm investigating ways the efficiency or performance of the system could be improved without major surgery but I'm neither a chemist nor physicist (nor surgeon).

Here's the system as explained by the manufacturer:

And here's the actual unit, minus some lagging round the boiler: 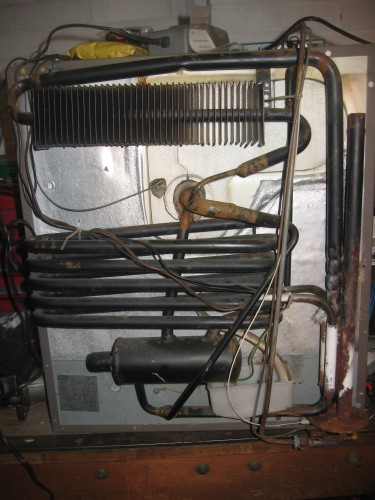 So you can see it's pretty basic, they haven't changed the design in decades.

My main train of thought, based on the bleeding obvious, is that either more heat could be added at the boiler end, or more cooling (basically, a fan) could be added to the condenser.

However, I don't know enough about how the coolant behaves to know if this would be of any benefit - adding heat could just ruin everything, cooling beyond a certain point may make no difference, etc. etc.

Additionally, I don't know if things could be done at other points in the cycle (cooling or heating other areas such as the absorber being the obvious easy wins) to improve matters.

I would also like to add that this is mostly driven by my curiosity for tinkering with things, I realise that the real-world answer to a better fridge is to buy a compressor type one - but they're expensive (seriously, compressor camping fridges are more than a full-size household fridge+freezer) and I won't learn anything that way ;)

EDIT: Thanks for the responses, ultimately the thing was never going to be viable running on 12v so we bought a compressor-type which is about 10x more efficient (in electricity) by comparison.

I've come here for basically the same reason, however I have some suggestions that I've done and I believe they have helped. And my fridge is basically the same as your, just a bigger model, same manufacturer. Firstly I should suggest messing with the process (heat etc) would not be a good idea as I would assume the manufacturer would have optimized the design years ago, and I have heard over heating the boiler can cause catastrophic and irrepairable damage . My fridge has a freezer box (shoebox size, quite useless) within the fridge and a heat sink next to it for the fridge part. I took the door off the freezer and cut the base out of the box, that made a huge difference, infact with it set on high on a cool day of 20c or less items in the bottom of the fridge will freeze. But as the camping car is used mostly in summer and it's hot that doesn't happen then. If you need a freezer use the engel. The fridge is mounted permanently into the camping car with a door on the outside to access the back of the fridge, it has vents top and bottom, on the inside of the bottom door vents I've installed 2 mini computer 12v power fans, they are very week but do set up a positive upward circulation of air over the absorber/condenser. As these use so little electricity they can be connected into your auxiliary battery without fear of draining it. I think the added circulation helps on hot days. And finally if you can't avoid parking it with the rear of the fridge on the sun exposed wall try a shade cloth over the area. Hope that helps.

Adding heat is risky and could lead to overpressure or damage. I'd also expect it to boil more of the water off with the ammonia, which is probably not ideal. Not sure about efficiency per se, but you can definitely improve the effectiveness with fans. It's a heat pump that maintains a given temperature delta not between outside and inside exactly but between the condenser and evaporator. So, forced air across the condenser can definitely help (as long as you're not creating excess cooling at the boiler). So can forced air across the evaporator heat exchanger fins on the inside.

In practice, it's also worth looking at the installation instructions on the fridge to see if the installer followed them. They're pretty sensitive to the exact placement of vents, baffles, and insulation.

I worked as a production manager for a company that manufactured similar units. On these absorption units, the inside temperature is directly related to the ambient temperature. The warmer it’s outside, the warmer inside. Good ventilation over the condenser to get rid of heat does help and will make a difference. As long as you don’t disturb the natural convection that takes place in the boiler’s flue. The chest type units work a bit better as all the cold air inside does not get lost every time the door is opened and closed. There are a few other points to consider though. The gasses (hydrogen and evaporated ammonia) and liquids (condensed ammonia and water) are circulated with heat, pressure and gravity. Making sure that the unit is level is important, and an out of level unit may not function optimally. I also noted the removed casing and insulation around the boiler. When installing the insulation (usually with a type if mineral wool), it is important to achieve good compaction and density for optimal insulation. Loosely packed insulation reduces the efficiency significantly. Also, inside the flue there should be a spiral twisted plate suspended on wire. Make sure it's present as it swirls the heat from exactly the correct height above the heat source. Then lastly, make sure your gas burner has a blue flame, not a bigger flame and not a yellow flame, but a blue flame. Hope this can useful.

Not the answer you're looking for? Browse other questions tagged thermodynamics solubility absorption or ask your own question.

2
Why is lithium bromide used in absorption refrigerators?

3
How does Ammonia and water mixture works in an absorption refrigeration?
2
Resonance condition for absorption of energy
0
Does liquid ammonia react with hydrogen gas?
6
What is the difference between dissolution and absorption?
1
How does refrigerator actually work?