Deviation of Ytterbium from general trend

What is the reason for deviation of ytterbium from the general trend of lanthanides in terms of hardness, melting point, density etc.?

To compliment Jon Custer's comment, we can likely trace this deviation to the electron configuration of ytterbium. Note that ytterbium is not the only deviation among the lanthanides - Europium deviate as well: 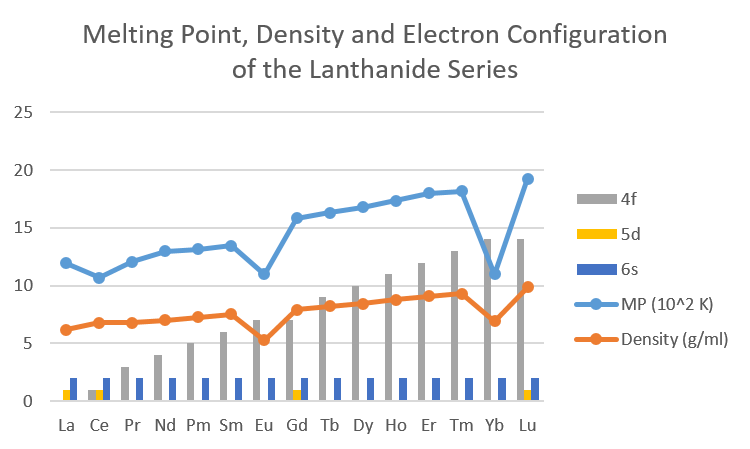 Why is that? Note the electron configurations of europium and ytterbium:

In europium, the $4f$ subshell is half-filled, an arrangement that is particularly desirable from a quantum mechanics standpoint. In ytterbium the $4f$ subshell is completely filled, another 'happy' arrangement. These configurations lead to changes in bonding behavior, for example noting that most lanthanides have the hexagonal close pack or the double hexagonal close pack crystal structures. The only ones that are different are samarium, which is rhombohedral, europium which is body-centered cubic, and ytterbium with is face-centered cubic.

The link between electron configuration and physical properties exists elsewhere in the periodic table, but the trends are not as clear. However, transition elements with filled or half-filled $d$ subshells are likely to have lower melting points than their neighbors.

66
Why do elements in columns 6 and 11 assume 'abnormal' electron configurations?