Can iproniazid be prepared by reacting isoniazid with 2-chloropropane?

I'm asking as I fear that the 2-chloropropane might react with the pyridine ring to form k-isopropylpridine-4-carbohydrazidine where k=2,3,5. Or that no reaction will take place. 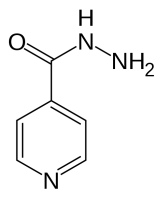 Alkylation of the pyridine ring under normal conditions is very unlikely, so that's not a major concern. The nitrogen is electron withdrawing, hence electrophilic aromatic substitution reactions are much more difficult to achieve on pyridine than benzene, particurarly absent catalysis. Additionally, the α-amino ketone substituent already on the ring is further deactivating (since it contains a π bond conjugated to the ring and a highly electronegative atom, i.e., oxygen).

One issue is that pyridine is liable to form quaternary ammonium salts when reacted with alkyl halides. See for example the substances paraquat, diquat, and the following paper on pyridine chemistry. While the quaternization of H-bearing ammonium cations is easily reversible (given that they can be deprotonated), the same can't be said for the nitrogen of the pyridine ring. Generally, the only methods I'm aware of for dealkylation of quaternary ammonium salts involve hydride donors and strong reducing agents, such as lithium aluminum hydride. Certainly, the ketone group would need to be protected in that situation.

There is also the issue of avoiding polyalkylation, as well as selecting which of the two amines in your substituent react, in view of the fact that the basicity and nucleophilicty of amines increases with the number of alkyl substituents. Sterics, however, might preclude that from becoming a problem in this instance.

The $\ce{NH_2}$ group in given compounds is very similar to regular amine fragment and is more active than acylated $\ce{NH}$. However, alkylated amines are more active than non-substituted ones. So, I'd expect a very significant amount of double-alkylated product.