b) What would the products be for an E1 mechanism

There is no mention of reaction conditions.

I am not totally sure what the effect of the isotope will have on bromine's ability to leave. I am guessing that the bromine-81 will leave since it is bigger and can stabilise the negative charge better.

I am also not sure how the products for the E1 and E2 mechanism will be different. Won't they be the same?

Under E1 conditions (typically hot, polar protic solvent), one of the bromines will leave as bromide to give a carbocation. Ignoring the isotope effect, there's about an equal propensity for either of the isotopic bromines to leave, giving about a 50/50 ratio of the two carbocations. Deprotonation at the beta-position gives an alkene. I've only shown the most substituted possible alkene since that will be the most stable and major product.

(Note, the carbocation could rearrange, but I'm ignoring that for this level of analysis.)

Under more strongly basic conditions an E2 reaction is more likely. There is a strong preference for an anti-periplanar arrangement of the leaving group, carbons where the alkene will form, and the deprotonated hydrogen. This stereochemical requirement is more easily visualized in the chair forms, which are not equivalent. The structure on the left is more stable since the methyl group is placed equatorially. In this conformation, there are two hydrogens that are anti-periplanar with the bromine-81 atom (green). A bulky base would react with the least hindered hydrogen (purple) and eliminate the bromine-81 to give the disubstituted alkene shown. A smaller base would be more likely to produce the most stable product, which results from deprotonating the hydrogen in blue.

Just for completeness I've shown the elimination product of the less stable chair conformation. In this case, there is only one anti-periplanar arrangement. If the orange hydrogen is deprotonated, then the bromine-79 atom can be eliminated to give the cyclohexene shown. 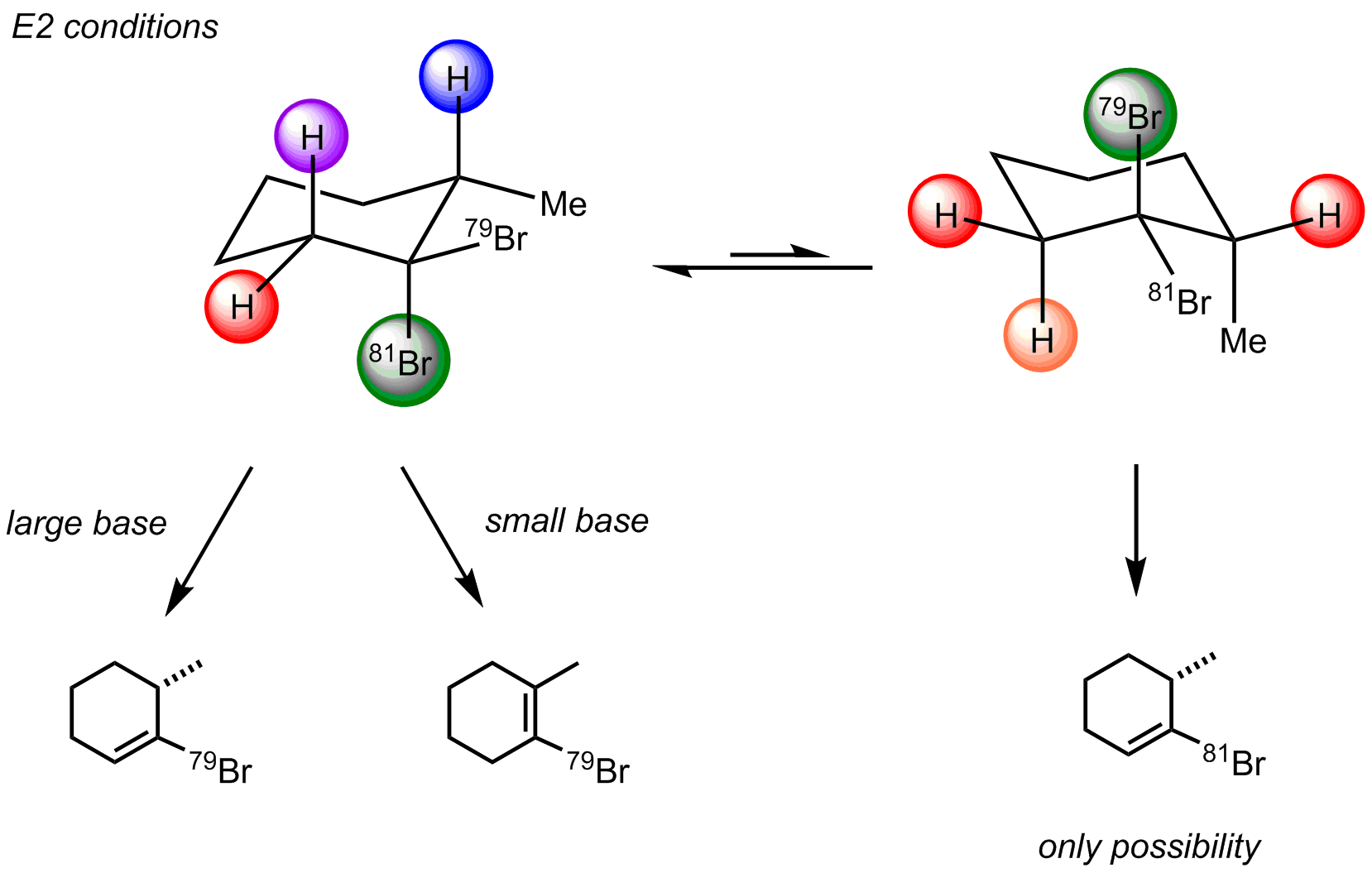 Not the answer you're looking for? Browse other questions tagged organic-chemistry reaction-mechanism isotope or ask your own question.

2
SN1 or SN2, the kinetic isotope effect
4
Elucidating reaction mechanism and purpose
8
Decarboxylation / Elimination type reaction
1
Displacement of leaving groups in organic reactions
4
Must a sample of a deuterated compound be isotopically pure for kinetic isotope experiments?
7
Elimination of bromine with sodium iodide and electrocyclization