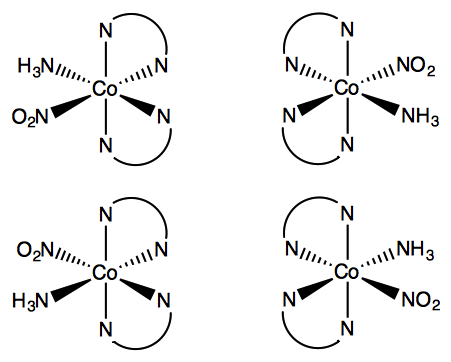 I reckon that there are 4 isomers, as drawn above. Am I correct?

coordination-compounds isomers
Share
Improve this question
edited May 4 '20 at 6:27

Note: I am answering this as a homework question, i.e. not actually giving a definite answer.

As a first idea, reduce the degrees of freedom in your complex. You could start by assuming what the number of isomers is for $\ce{[CoCl2(en)2]}$, in which the two non-ethylenediamine ligands are identical. And you can further reduce that complex’ complexity by going to something like $\ce{[CoCl2(NH3)4]}$, in which the ethylene bridges have also been removed. (It may have made more sense to stick with $\ce{NH3}$ ligands in the first step, but then I cannot simply substitute for ammine in the second step, so I chose something entirely different there. What you choose is up to you, as long as you don’t create ambiguity.) For the tetraammine complex, it should be clear that there are two different isomers: cis and trans. Upon readding the ethylene bridge, these two isomers still exist. Do your four structures account for this isomerism?

Next up, ask yourself whether any of the isomers of $\ce{[CoCl2(en)2]}$ can be optically active, that could give you another set of isomers. This is important because of the next step.

This next step involves readding the difference between the two monovalent ligands, i.e. going back to $\ce{[Co(NO2)(en)2(NH3)]+}$. Remember to consider the topicity of the two chlorides you had before in case you run into enantiotopic or diastereotopic chlorides that would give you a new set of isomers.

Finally, remember that nitrite has two or three possible means of attaching to a metal centre: κN, κO and κO,O'. Remember to consider whether all theoretical possibilities are actually possible.

The final answer I came up with is given in a spoiler tag.

The trans-isomer has a high symmetry of $D_\mathrm{2h}$ if I did the transforming correctly, meaning that it is does not have enantiomers. Also, it renders the two chlorides homotopic, meaning that we get one trans isomer.

There are two cis-isomers that behave as enantiomers of each other: a Δ and a Λ isomer. These two each have homotopic chlorides again, meaning we get a set of two cis-isomers. To be honest, I only saw that when I tried it out with a modelling kit.

This means that substituting one of the two chlorides with something else will result in identical compounds, giving us three different isomers. (Note that you have drawn two pairs in which one transforms into the other by simple rotation. You only have two different complexes drawn in the question.)

The chelating nitrite ion is not possible in your complex since you have a rather small metal centre that only allows octahedral coordination. Therefore, each of the three isomers we established earlier can exist in a κN and a κO form. That gives us a grand total of six possible isomers whereof two pairs are enantiomers of each other and three are constitutional isomers of the other three.

Not the answer you're looking for? Browse other questions tagged coordination-compounds isomers or ask your own question.

4
Stereoisomers of compounds named tribromocyclobutane
4
Constitutional isomers for four carbon thioesters
5
Are a meso compound and its mirror image isomers?
5
Are the following two compounds isomers or not?
4
Why isn't Cahn Ingold Prelog principle used to name the isomers of complex compound having square planar geometry & different ligands attached to it?
8
The number of geometrical isomers of complex of type [Ma₃b₂c]
6
How to calculate the 15 geometrical isomers of an octahedral complex with all ligands different?
0
Why is there only one ionization isomer of [Cr(NH3)5(NO2)]Cl2?
5
The maximum no. of isomers (including stereoisomers) that are possible on mono-chlorination of the compound: 3,3-dimethylpentane is?
0
Which are the Geometrical isomers of the complex [Cr(NH3)2Cl2(en)]+?Is it one or two?