Is lithium hydride a salt?

Hydrogen is generally considered a non-metal, and a non-metal and a metal often makes a salt. However, lithium hydride seems like a special case. The wikipedia article does not clearly state if the compound is a salt or not, only describing it as "salt-like".

Structurally, it makes sense to classify it as a salt, due to the network structure, but are there any clear definition to settle where the compound belongs? 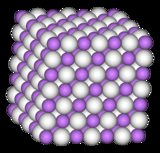 The Wikipedia article Salt (chemistry) starts off with "In chemistry, a salt is an ionic compound that results from the neutralization reaction of an acid and a base." This seems like a pretty good Chemistry 101 definition. So, in essence, this means having an anion and a cation in the salt, which further implies ionic bonding. This seems like a pretty reasonable place to start.

I'd think that the definition could be tweaked to say "a salt is a solid ionic compound..." That would indicate that one "molecule" isn't a salt. So one molecule of NaCl in the gas phase is a molecule, not a salt. I also have trouble thinking of molten NaCl as a salt. So I'd describe it as a "molten salt."

Kind of like way I think German works. I'd expect that German would have some compound word for "molten salt" which better denotes that there is one new idea. So in English if a "salt" is a solid that has a 3D crystal lattice how can a salt be "molten"?

In general, there are a lot more organic salts than inorganic, so dissolving in water isn't a good restriction.

These last paragraphs point out the sorts of problem in trying to make such a definition absolutely unambiguous. You get a one sentence definition, then two pages of qualifications which render the definition useless.

Hydrides of metallic elements are ionic compounds. In the case of $\ce{LiH}$ there may be some covalent characters due to the small size of the $\ce{Li+}$ ion. This hydride on electrolysis in molten form gives $\ce{H2}$ on the anode, which is an indication of the presence of hydride ions and, further, this hydride reaction with water or protic acid evolves $\ce{H2}$ gas.

Not the answer you're looking for? Browse other questions tagged ionic-compounds terminology hydrogen or ask your own question.

6
What's the difference between pipettes calibrated “TD”, “TC”, “Blow-out” and related terms?
0
Is Fe(OH)3 a salt or an alkali?
2
How is NH4Cl a salt?
2
Can the hydride ion act as a ligand?
0
Dissociation of zinc hydride
5
What is chemical decomposition in the context of a crystal or amorphous solid?
2
Radius of hydride (H⁻) ion