What is the oxidation state of nitrogen in N2O5?

According to the formula it should be +5 but according to its structure shouldn't it be +4? How is it +5 then? 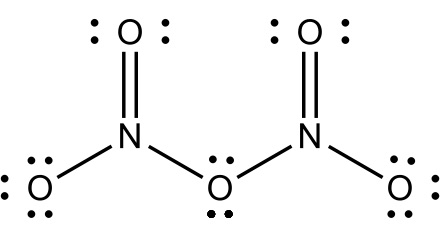 Notice that it is a resonance structure of:

Now one of the bonds are coordinate bonds where nitrogen donates BOTH its electrons to oxygen (otherwise, oxygen cannot have a single bond without a negative charge and no peroxy type linkage).

So, while determining oxidation state from the structure :

O. S is a theoretical concept. Electrons shared between two unlike atoms are counted towards more electronegative element.

Nitrogen cannot exhibit a +5 oxidation state due to the absence of d-orbitals.

As Nitrogen is in 2nd period in the modern periodic table, principal quantum number being n=2, the Azimuthual Quantum numbers = 0 to n-1 for Nitrogen it ranges from 0 to 1.

0 (zero) represents an s orbital and 1 represents p orbital hence no D orbitals are there.

... which clearly tells us that due to absence of d orbitals, nitrogen cannot expand its oxidation state greater than 4. Hence by the basic principle of quantum mechanics we can say that in N2O5 nitrogen has +4 oxidation state.

NOTE: Formulae are made to simplify the things. But they have some limitations But in order to overcome those limitations one must use the basics of the subject.