What should be the name of this substituted cyclopentane? 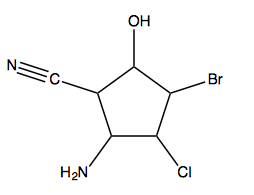 I think its name is 5-amino-3-bromo-4-chloro-2-hydroxycyclopentan-1-carbonitrile. Is that correct?

According to the current version of Nomenclature of Organic Chemistry – IUPAC Recommendations and Preferred Names 2013 (Blue Book), the preferred suffix for the principal characteristic group $\ce{{}-CN}$ is ‘carbonitrile’. Therefore, the name of the parent structure of the compound given in the question is ‘cyclopentane-1-carbonitrile’ (note that the locant ‘1’ would be omitted in monosubstituted homogeneous monocyclic rings, i.e. ‘cyclopentanecarbonitrile’).

The relevant rules for the numbering of locants for the four substituent prefixes (‘amino’, ‘bromo’, ‘chloro’, and ‘hydroxy’) are: