What will be the major product in the following reaction?

I tried to work out the mechanism, which starts with protonation of the alkene, and I got C to be the answer (which is the answer in the book as well). But, I've heard that three-membered rings generally don't expand due to their exceptional stability. Is this true? And between the alkene and alcohol functional groups, which is more likely to get protonated?

Three-membered rings are not exceptionally stable, on the contrary, they suffer a lot of ring strain and readily take part in ring-opening reactions. Exceptions include the Hückel-aromatic cyclopropenyl cation, and the resonance-stabilized cyclopropylmethyl cation.

Your assumption that the alkene is protonated is correct, as this generates a substituted cyclopropylethyl cation. The regioselectivity of the protonation occurs to give the more stable secondary carbocation instead of a a primary carbocation. A 1,2-alkyl shift then occurs, which is in this case assisted by the lone pair on oxygen. Deprotonation of the carbonyl then yields the four-membered ring ketone C (2-methylcyclobutanone). [The carbons are numbered in blue to make it easier to see what's going on: the C1-C3 bond is broken and C3-C4 bond is formed.] 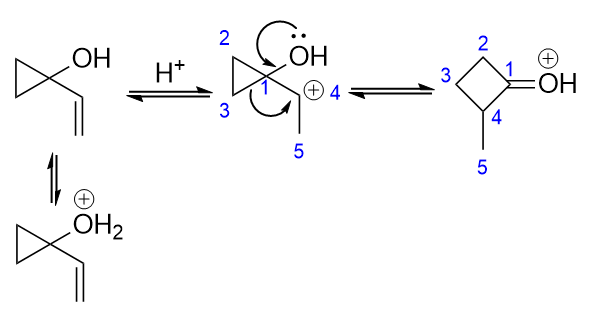 This is similar to the semipinacol rearrangement; in this case, the carbocation is generated via protonation of an alkene instead of by loss of a leaving group.

The formation of products A or B would require protonation of the alcohol group, followed by loss of water in an E1 reaction. In either case, the final deprotonation yields a three-membered ring with an endocyclic or exocyclic double bond, which is more strained than a saturated three-membered ring. This reaction pathway is therefore less favorable than ring expansion. Protonation of the alcohol can certainly happen, but since it does not lead to the formation of any stable products, it is said to be unproductive.

Not the answer you're looking for? Browse other questions tagged organic-chemistry reaction-mechanism carbonyl-compounds alcohols or ask your own question.

47
What is the reason for the exceptional stability of the cyclopropylmethyl carbocation?

1
Naming an ensemble of compounds
16
Exocyclic vs. endocyclic double bonds in E1 elimination
7
Identifying functional groups
9
On the mechanism of the nitrogen-removal step of the Wharton olefin synthesis
4
How do I decide whether ring will expand in this reaction or not?
3
Which ring expansion in cyclobutyl(cyclopropyl)methanol is favourable?
4
Is Pinacol rearrangement the source for the ring expansion?
11
Why does a proton prefer to attack a double bond instead of protonating an alcohol in a reaction of unsaturated alcohol with sulphuric acid?