Has anyone seen a version of the iodine clock reaction where instead of the system oscillating between clear and blue it shows blue bands travelling down the vessel?

I ask because someone not unknown to this site has made a version of the experiment with such moving bands and I was wondering if it was worth sending a write up of it to the Journal of Chemical Education or some similar journal.

Apologies if I was unclear, I am asking the phenomenon has been published before or if it is unpublished but already well known.

I know the BZ reaction can produce all sorts of patterns, but I have never seen travelling bands in the iodine clock. A quick Google has found no mention of the phenomenon. I am not asking "is it worth publishing", which I believe is against site rules anyway. I'm just asking about prior art.

Whilst not specifically an iodine clock reaction, Belousov-Zhabotinski reactions are oscillatory and can produce moving bands, spirals and concentric circles of colour. This works best in thin films (limiting convection) as the top commenter on the linked video points out.

There's a great thesis by Peter Hantz which looks at these kinds of reactions in detail (the first bit is in french, the rest is in english) and specifically covers Liesegang banding, where an oscillating chemical reaction in a mobile phase causes bands of precipitation in a gel column. As Hantz points out on page 22, the gel is required to prevent convection from destroying the bands, however the viscosity of the gel also freezes the precipitate in place as it forms. This would seem to be close to what you are interested in, however.

Here's a picture of Liesegang bands in test tubes from wikipedia: 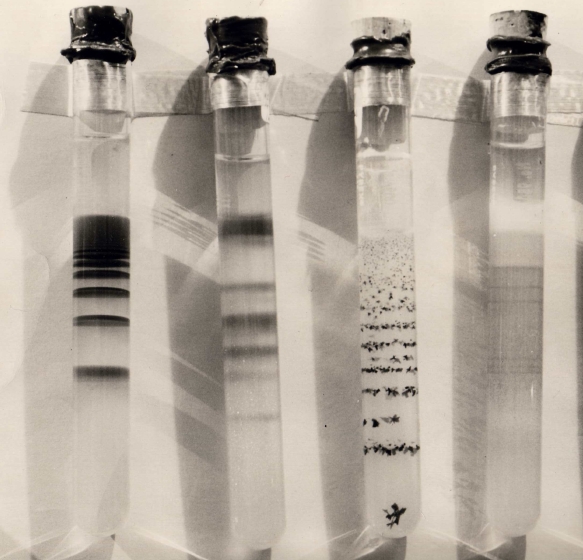 Not the answer you're looking for? Browse other questions tagged inorganic-chemistry kinetics or ask your own question.