What is the freezing point of sulfuric battery acid?

What constituents contribute to this effect? What is the diluent used in these batteries? What would the freezing point be?

Due to the freezing-point depression of the electrolyte, as the battery discharges and the concentration of sulfuric acid decreases, the electrolyte is more likely to freeze during winter weather.

There freezing point of water-sulfuric acid solutions varies as a function of concentration in an unusually complex way, having plural local minima and maxima.

This is because the solid has eight identified phases: 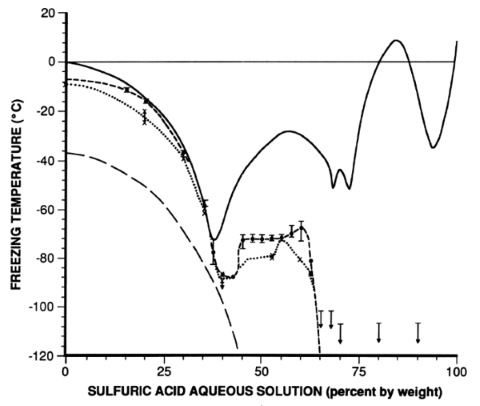 What constituents contribute to this effect?

Now, why does this happen? The presence of a solute results in the lowering of chemical potential of solvent; since the lowering occurs even in ideal solutions where enthalpy of mixing is zero (and also since it doesn't depend on the properties of the solute) one can probably guess that it is an entropic effect.

A rough qualitative argument can be made as follows:

We know that liquids possess greater entropy than solids, thus when we freeze something we are going from a "high entropy state" to a "low entropy state". The presence of a solute makes an additional contribution to the entropy of the liquid, and thus this enhanced molecular randomness opposes the tendency to freeze, and consequently we need a lower temperature to freeze.

As an aside, a similar discussion can be applied to the elevation of boiling points of solutions (compared to pure solvents)

What is the diluent used in these batteries?

Typically, it is plain old water

What would the freezing point be?

This is perhaps the most difficult question to answer. If one were to do such a calculation, there are least three complications I can think of.

First, most chemistry textbooks give a simple relation to calculate the depression of freezing point, namely $\Delta T_f = ik_fb$, however, this simple empirical relation just holds for dilute solutions. A more complicated treatment is necessary to deal with concentrated, non-ideal solutions.

The second problem is that the concentration of the electrolyte itself changes during the charge-discharge cycle.

And finally, as @DavePhD has pointed out, the freezing point of water-sulfuric acid mixtures doesn't follow a simple trend.

Not the answer you're looking for? Browse other questions tagged inorganic-chemistry everyday-chemistry electrochemistry or ask your own question.

2
Is there anything in the literature that supports revolutionary claims for this “new” sulfuric-acid battery?
11
Is greater relative AA battery capacity at high currents indicative of greater capacity at low currents?
3
Reviving a 6 Volt lead-sulfuric acid battery
6
Why is the boiling point of sulfuric acid much higher than that of phosphoric acid?
3
How exactly does a battery work (specifically Pb/H2SO4/H2SO4/PbO2 lead acid battery)?
3
How can you identify the anode and cathode of a car battery of indistinct shape by using a potassium iodide solution?
7
Can lead-acid batteries release CO? Or can a CO sensor detect gasses other than CO?
1
Is sulfuric acid still hazardous after it dries?
4
How does equalizing voltage for lead acid battery depend on the temperature?