Specifically, I'm wondering why it is that the asymmetric stretch in most (although there are exceptions to this I believe) molecules is higher in energy than the symmetric stretch.

Similarly, I would like a nice, physical (ideally quantitative/mathematical) explanation of why bending modes are usually lower in energy than stretching modes.

I can rationalize this second question on the basis of electrostatic forces. That is, any distortion from the minimum of the potential energy well will either cause more coulombic-type attractive forces or more coulombic-type repulsive forces. These forces should not be as large for a lateral displacement (bending) than for a stretch of some kind. This makes sense because the change in radius will not be as large when simply moving to the side from an equilibrium position. Of course, the change in radius is significant because electrostatic potential energy goes as $\frac{1}{r}$.

Anyways, that's a pretty classical answer, so I wonder how both of those questions can be explained more quantitatively as well as quantum mechanically.

I don't know how to explain the bending mode, but there is a nice mathematical explanation for the difference in stretching modes.

Take $\ce{CO2}$, carbon dioxide, as an example. I'll use B3LYP/6-31G(d,p) values. $\nu_{1}$, the symmetric stretch, is 1372 cm$^{-1}$, and $\nu_{3}$, the asymmetric stretch, is at 2436 cm$^{-1}$. Now consider $\ce{CO}$, a single carbonyl group (the molecule won't work for this example). Looking at an IR table, the average stretch will be about 1750 cm$^{-1}$. $\ce{CO2}$ looks a lot like two $\ce{CO}$ bonds that are linear and share a carbon. But, clearly $\ce{CO2}$ doesn't have a doubly-degenerate stretch mode of any kind at that frequency, so something is causing the local modes to not be identical to the normal modes. Because both local modes have the same symmetry, they are allowed to mix with some coupling between them, just like molecular orbitals. A local mode is a vibration that is completely uncoupled from all other modes; its motion does not influence the motion of other atoms and vice versa.

and the normal modes themselves:

By convention in Huckel theory, $\beta$ is usually negative, so the 2nd eigenvalue is the one lower in energy.

If you take the dot product between each normal mode eigenvector and the vector of local modes:

This is how the energy levels (eigenvalues) split with increasing the coupling between the initially degenerate local modes into distinct normal modes: 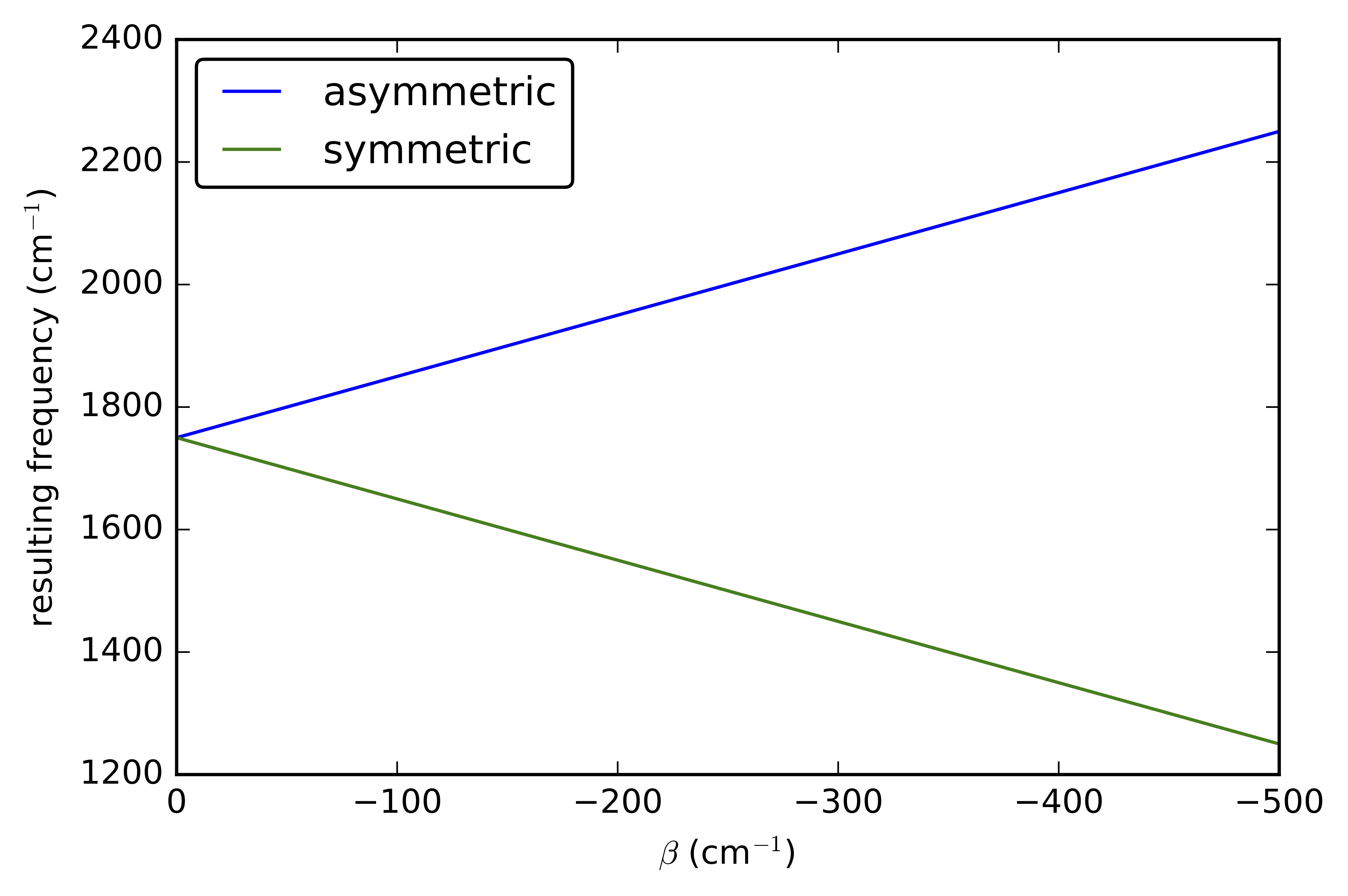 Here is a link to the Jupyter Notebook containing the math I did. This is a simplified (math-wise) version of what we did in a paper, since the conceptual point is identical.

This sort of description is how any two-level time-independent system works. See how the two spin energy levels of a free electron change in energy when an external magnetic field is applied (Zeeman effect): 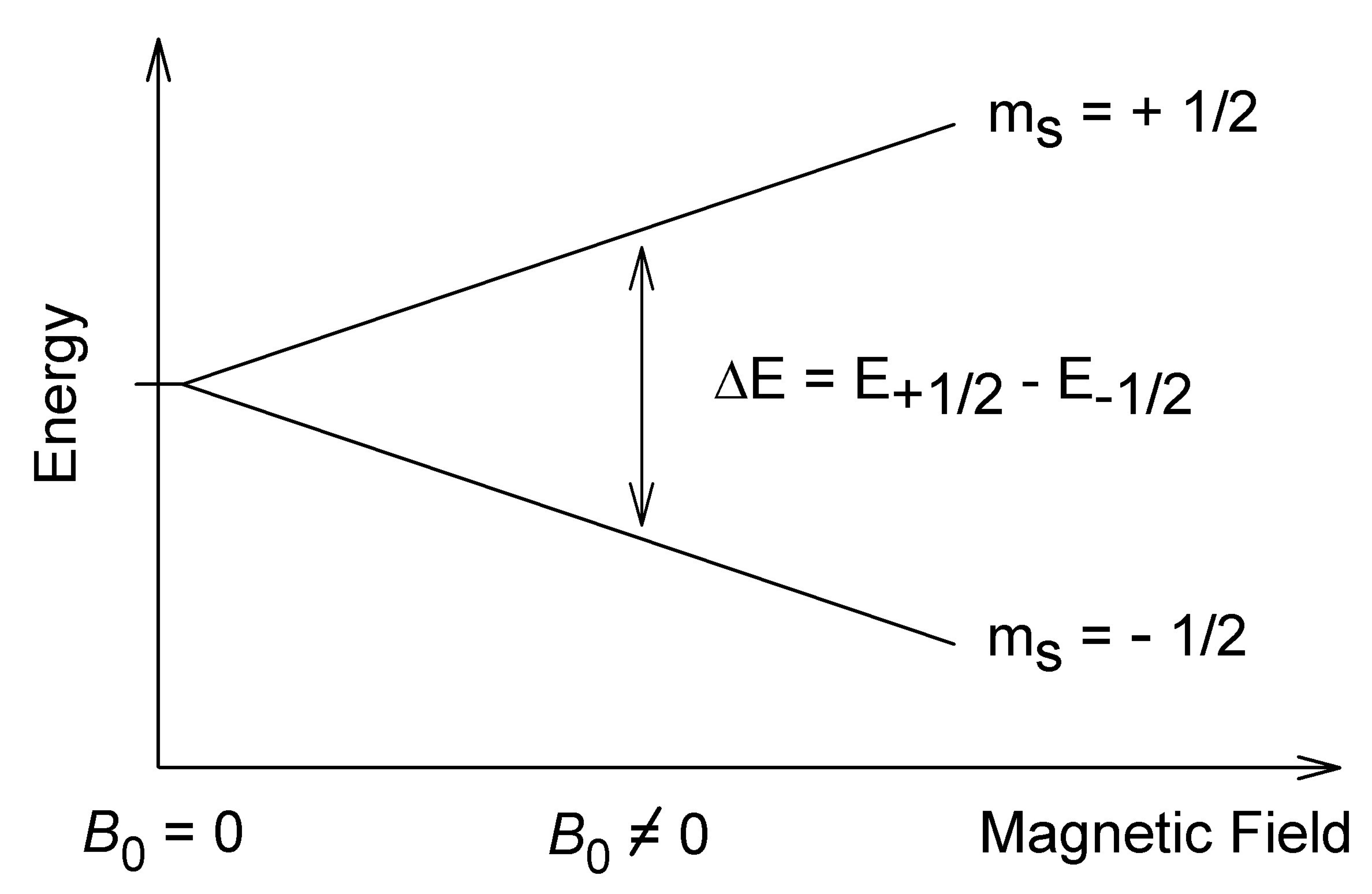 11
How can enzyme/substrate reactions that adhere (largely) to quantum theory also require 'Newtonian' consideration of gravity?
3
Can one relate the frequencies of vibrational modes within a molecule to the molecule's HOMO/LUMO energies?
16
Conflict Between Organic and Physical Chemists--explaining the intensities of IR absorptions
4
Raman Spectrum of carbon chains: How to identify the vibrational modes
2
Do different vibrational modes correspond to vibrational energy levels?
4
Potential wells and symmetry in absorption spectroscopy
8
Any way to see "cubic-active" vibrational modes in molecules?
4
Fundamental vibrational modes for QM9 molecules