Is peroxoborate and perborate the same thing?

Recently I came across the following question:-

The term peroxoborate came from the fact that it has the peroxo bond $\ce{-O-O}-$. So, it should be strictly called peroxoborate. But some books says peroxoborate while other books say perborate. Is it true?

So, is peroxoborate and perborate the same thing? If so, why some book says peroxoborate while othe books perborate? It should be strictly called peroxoborate since it contains the peroxo bond $\ce{-O-O}-$.

But this is what written in Lee, J.D. Inorganic chemistry

So, what is the correct name:- sodium perborate or sodium peroxoborate?

This is necessarily not a chemistry answer but is a continuation of aventurin's answer.

Google ngram viewer is an online search engine h that charts frequencies of any word or short sentence found in the sources printed between 1800 and 2012 in American English, British English etc.

So, here is the Google ngram for peroxoborate and perborate.

So, you can see that perborate is more often used than peroxoborate. Though, the correct name (IUPAC name) is tetrahydroxidodi-µ-peroxido-diborate, people often mention the compound sodium perborate. Sodium peroxoborate seems to be obsolete.

TL; DR: Yes, perborate and peroxoborate are both the same thing. Perborate is just more popular, but peroxoborate is a more literate name for the $\ce{[B2(O2)2(OH)4]^2-}$ ion.

A perborate is a name attributed historically in XIX century to the compounds containing $\ce{BO3-}$ anion (see e.g. an overview [1]). In 1900s it quickly gained a foothold in the market and remained there since, as sodium perborate quickly became a popular additive for cleaning products. For instance, the name of the popular laudry detergent Persil, which Henkel introduced in 1907, is a syllabic abbreviation formed combining German words "Perborat" (sodium perborate, bleaching agent) and "Silikat" (sodium silicate, dirt remover).

If we take another look at Google Ngram Viewer listing exclusively for peroxoborate, we'll notice that this term emerged only after 1961:

The reason is that in 1961 Hansson et al. [2] published a refined crystal structure of a controversial sodium perborate which was previously denoted with either $\ce{NaBO2 · H2O2 · 3 H2O}$ or $\ce{NaBO3 · 4 H2O}$ formula, and it was demonstrated that the correct formula unit is $\ce{Na2B2(O2)2(OH)4 · 6 H2O}$ and the name should indeed be sodium peroxoborate due to the presence of "the double peroxo bridge connecting two boron atoms" (I suggest having a look at this short communication from 1961: it's a great example of a concise and literal data presentation with effective illustrations).

A comment left in section "Per-acids of non-metals" in Wells' Structural Inorganic Chemistry [3, p. 422] is also quite peculiar (reference number updated; emphasis mine): 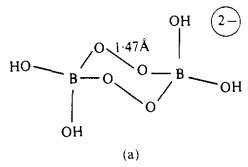 More recent textbooks also often make a note that it's more correctly to use peroxoborate, yet perborate is a more popular name due to above-mentioned historical background of borates in cleaning industry. For example:

This name describes the structure with two bridging peroxido groups.

However, perborate or peroxoborate are well known and more often used.

No, the names refer to different compounds. Attached below are their Lewis representations. 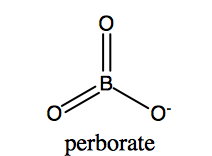 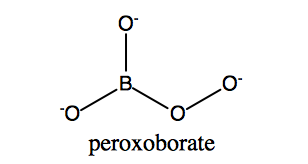 I should add that these structures were arrived at using Chemdraw's name to structure conversion. And it appears that this representation of perborate violates the octet rule. So this may be incorrect.

Not the answer you're looking for? Browse other questions tagged nomenclature structural-formula or ask your own question.