I have this example exam question for which I don't have the answer. I have been working on it the whole morning but I can't figure it out. The question suggests three molecules, only one of which corresponds to a given fragmentation table and mass spectrum following EI-based MS.

The table and EI-MS spectrum are unfortunately not of ideal quality, but they are as follows: 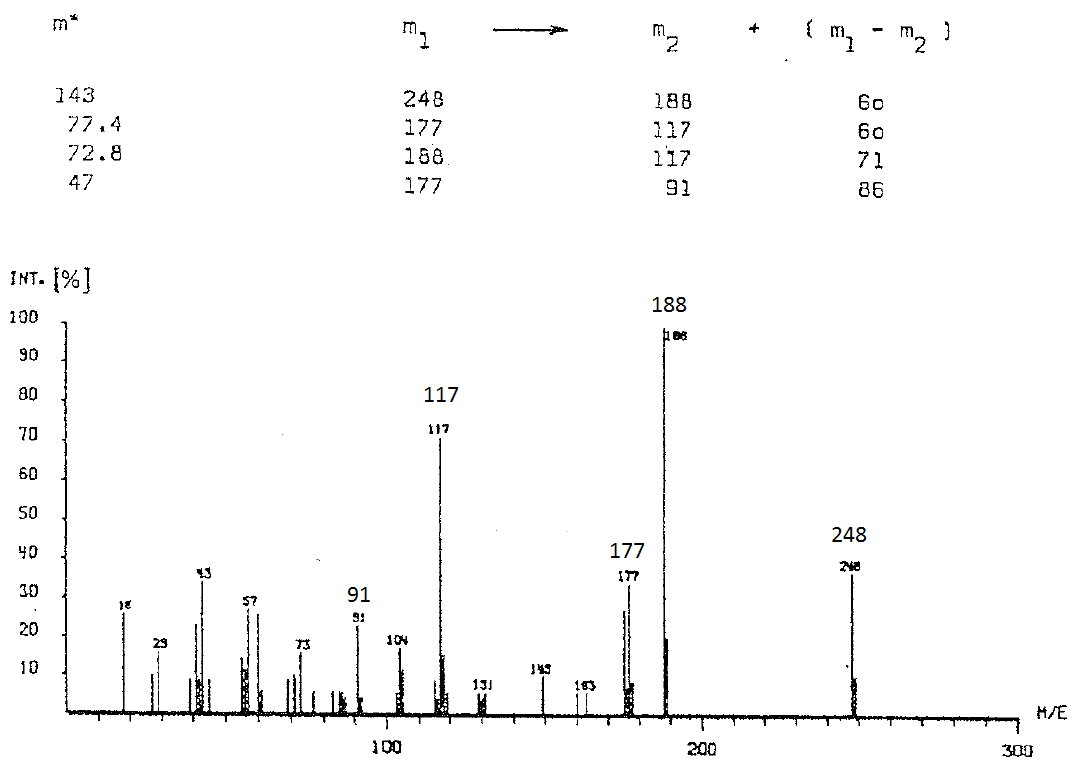 The 177 and 188 were given to both be directly stemming from the molecular ion, and with one of them having an even and the other an odd mass, this suggests a simple cleavage and a cleavage following rearrangement.

With pentylphenyl pentanoic acid I got close, but the fragment following rearrangement is 192 Da instead of the 188 Da seen in the spectrum. 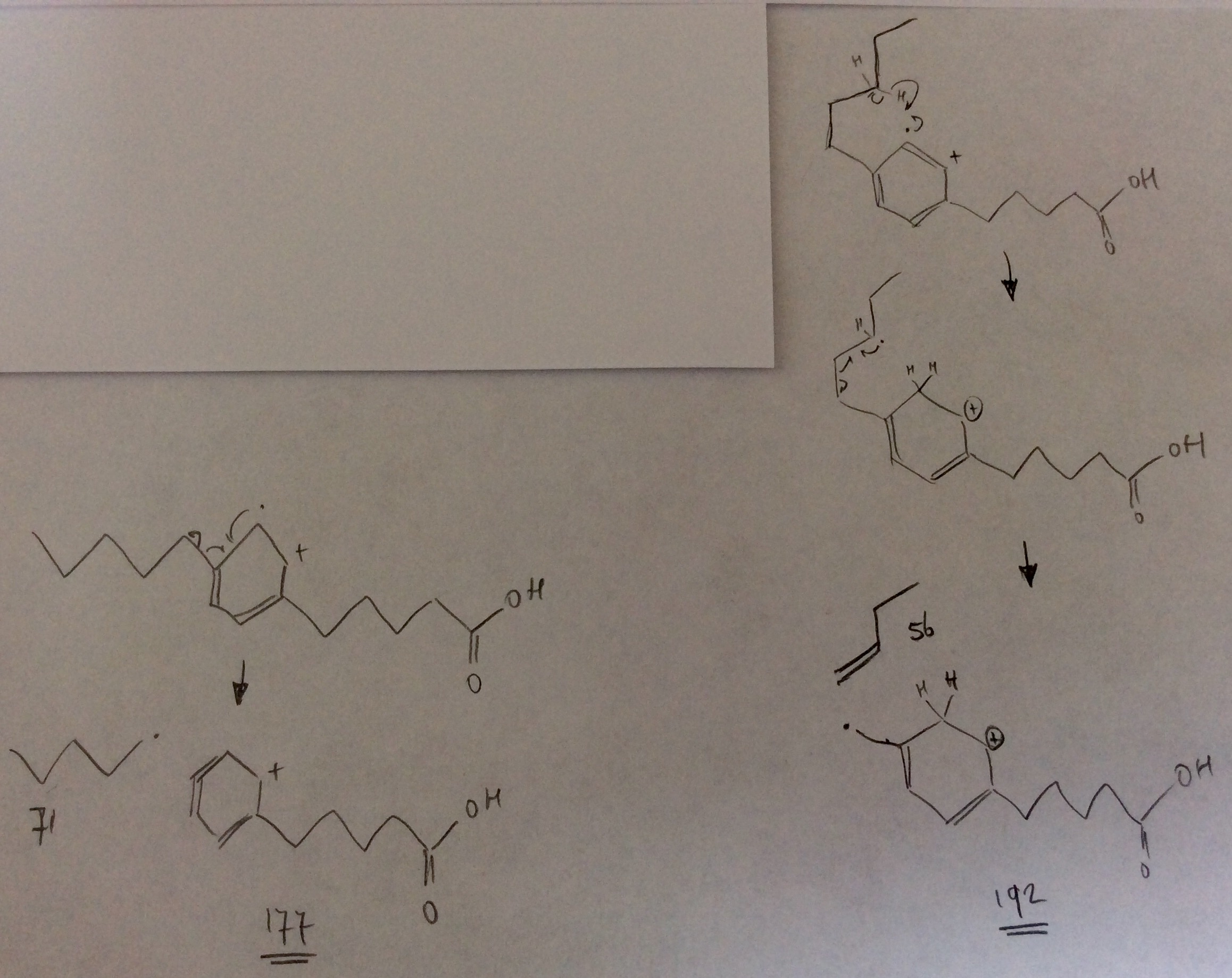 UPDATE - Let me add two other examples of what I have tried so far. Maybe there is something wrong with my approach or someone can see the obvious change that would get to an observed peak at 188 m/z from here. The fragmentation on the left (below), is where there actually are 188 and 60 fragments, but the 60 fragment carries the charge (this peak at 60 m/z can be seen in the spectrum). On the right, I tried to get to a similar fragmentation while starting by putting the charge on the phenyl. 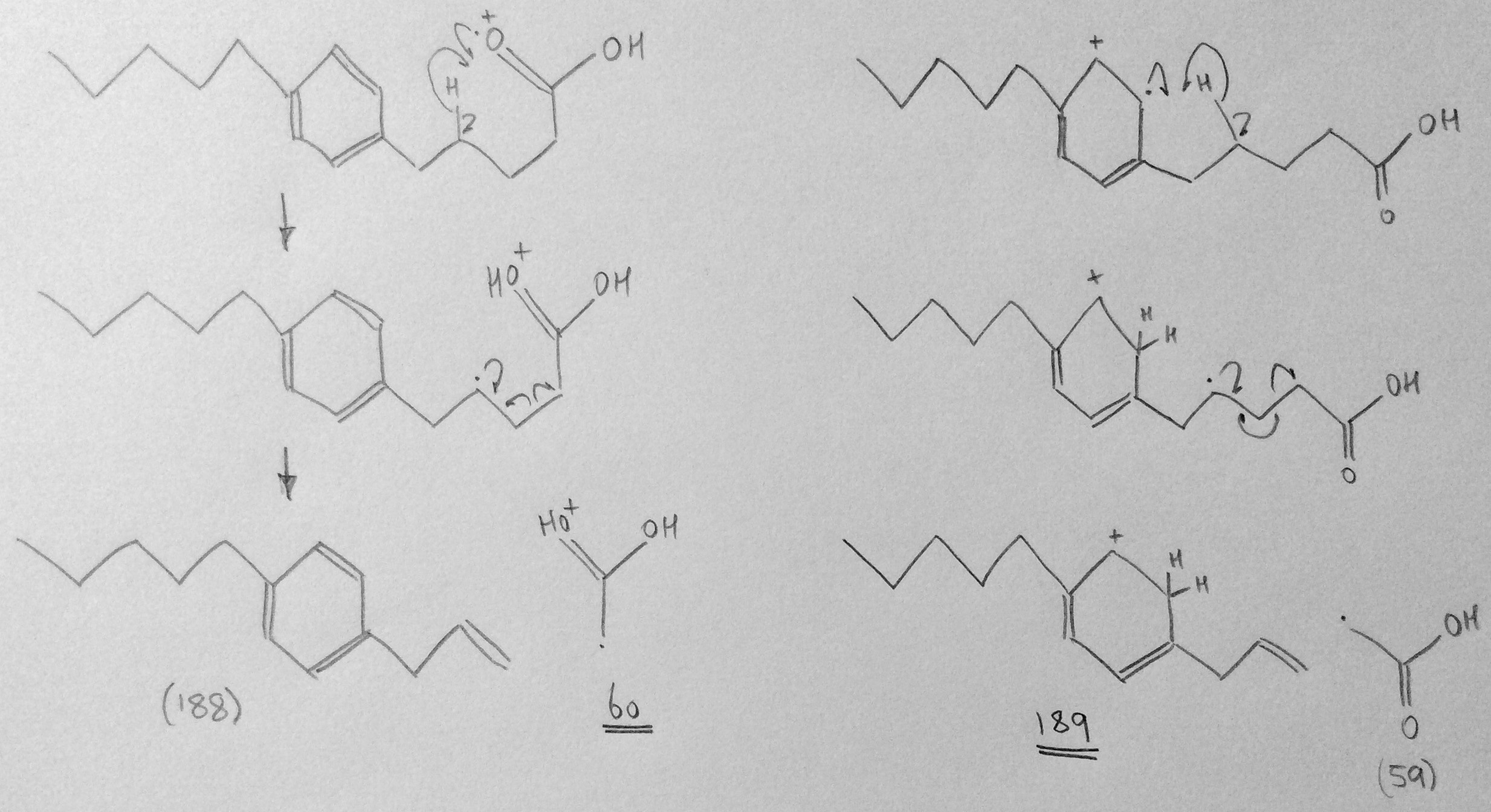 In your update you nearly got to the point: the McLafferty rearrangement from the carboxylic acid can lead to two products, either the ionized acetic acid (ML product) or the ionized alkene (ML'). In this case, ionization energy of the enol tautomer of acetic acid is probably much larger than that of alkenyl substituted benzenes (for instance the closest I could find in structure is o-Allyl-Toluene for which the IE is 7.78 eV). Thus from application of the Stevenson-Audier rule, the charge should remain on the moiety with the lowest ionization energy, leading to the formation of the m/z 188 moiety (ionized p-pentyl-allylbenzene).

This hypothesis is further reinforced as it also explains the formation of m/z 117 from a oss of 71 ($C_5H_{11}^\bullet$) from fragmentation of the m/z 188 radical cation, through a pathway similar to that leading to m/z 177 from the molecular ion.

(This is likely oversimplified mechanism interpretation: I strongly suspect that some other rearrangements or cyclisation likely occur in the process. I did not run a complete database search for other EI spectra of similar molecules, but for instance 10-phenyldecanoic acid leads to only a very minor loss of 60. Thus I would suggest that the m/z 188 probably undergoes cyclization and / or hydrogen migration processes leading other products.)