It is observed that rate of reaction of two isotopologues of benzene, $\ce{C6D6}$ and $\ce{C6H6}$, is the same for electrophilic aromatic reactions, as the deprotonation is not the rate limiting step. Instead the carbocation is usually limiting.

Do iodination and sulphonation somehow do show different rates with these isotopologues? Is $\ce{C6H6}$ the faster of the two, due to stronger C-D bond (smaller size of D)? If this is correct what is the reason?

Does the protonation becomes the rate limiting step? if yes, then why in only with iodination and sulphonation?

Update : Found potential energy graphs for suphonation and nitration and it does seem like protonation either becomes the rate determining step or just smaller than carbocation hill, but why in sulphonation, the deprotonation curve was high is still a mystery.

In general, deprotonation of a $\ce{C-D}$ bond would require more energy than that for $\ce{C-H}$ bond because the zero point vibrational energy of the bond is lowered. By referring to our harmonic oscillator zero point energy equation,

we see that as the mass for either atom increases, the zero point energy decreases, therefore, the bond is relatively more stable than its lighter isotopologue. However, swapping out isotopes in a molecule does not change the potential energy surface for the reaction [1]

Changes in the rate determining step may arise from the type of sulfuric acid used. Since fuming sulfuric acid has a higher concentration of $\ce{SO3}$ (the electrophile) then more dilute forms of $\ce{H2SO4}$, the rate limiting step is no longer forming the bond between benzene and $\ce{SO3}$, rather, it is re-forming the aromatic ring through deprotonation. Ergo, if you did a KIE study with different concentrations of sulfuric acid, you may see that only fuming $\ce{H2SO4}$ shows significant values of $\frac{K_\ce{H}}{K_\ce{D}}$.

This article [2] studied the iodination of benzene with the source of iodine being generated through the "oxidation of 0.5 g of $\ce{I2}$ in acetonitrile-tetraethylammonium perchlorate to 2.4 faradays/mol." 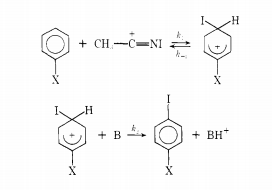 This article reports no KIE observed in nitration of benzene [4].

Not the answer you're looking for? Browse other questions tagged reaction-mechanism kinetics aromatic-compounds or ask your own question.