Are these Anti aromatic/aromatic or non aromatic?

Here, if we were to consider the resonating structure(s) with charge separation 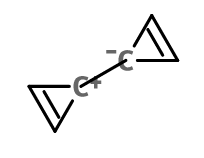 One ring is aromatic and other is anti aromatic, and secondly there is not continuous delocalization of pi electrons between those rings {if we don't include no resonating structures with no formal charges, as their contribution would not be equalish to normal form} what category would this go in? 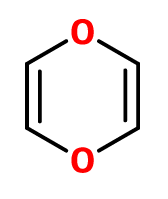 Like before, there can be no continuous electron delocalization like stated in previous example , only other ones the diff forms of 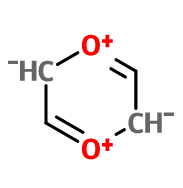 If we consider it to have enough delocalization, it would have 4n electrons and hence antiaromatic {although all the orbitals wont be mixed as 3 on each side twice with oxygen's lone pair being common between all of them}

Antiaromaticity is a fictional state with real consequences, that any molecule will distort to avoid.

In the case of molecule 1, the primary state will be a triplet (unpaired pi-electrons), with the central bond lengthening to decrease the pairing of the pi-electrons. This will lead to 3 electrons in each pi-system, and hence preventing antiaromaticity, because there are no longer 4n electrons in the rings. A fictional molecule, with the constituency shown for molecule 1 that is in a singlet state would be antiaromatic.

In the case of molecule 2, the molecule will distort itself to make the at least one of the oxygens non-coplanaer with the pi-system, and no longer being co-planar, the system will not be antiaormatic. A fictional molecule with the constituency shown for molecule 2 that is co-planar, would be antiaromatic.

It is unclear what you are asking about for pyrene.

Not the answer you're looking for? Browse other questions tagged electrons aromatic-compounds resonance or ask your own question.

12
Why is the lone pair of pyridine's nitrogen atom not part of the aromatic ring?
3
Why are spherical compounds with a half filled HOMO concidered aromatic?
3
Is (cycloprop-2-en-1-ylidene)propanedinitrile aromatic or not?
7
Which rings of this heterocyclic compound are aromatic?
24
How does the cyclopropyl group influence conjugation and aromaticity?
5
Why is 5,6-dimethylidenecyclohexa-1,3-diene non-aromatic?
1
What about the aromaticity of cyclopropenylidene?
9
Aromaticity of fused rings
6
Are 2-pyridone and cycloheptatrienide antiaromatic?