According to me Pt should be dsp2 hybridised giving a square planar geometry. So it is of the form M(aa)2 type. The ligand itself has a chiral carbon. Hence it can show optical isomerism. But can it show geometrical isomerism?

First of all, the compound is not M(aa)2 type.M(aa)2 shows no kind of isomerism (with normal ligands). Since the donor atoms on a ligand are different, it would be M(ab)2. And square planar structures show only geometrical isomerism and not optical isomers, as you think. Why?

Optical isomerism is when the compounds can have non super-imposable mirror image like structure. They should not have a plane (or axis) of symmetry. However, in a square complex, it is not possible. Since it will always have a plane of symmetry or a mirror image which can be superimposed on the previous compound, even if it is of type M(abcd) (Try this out for yourself)

But, you are right, carbon on your compound is chiral, so it can have different configuration of methyl and hydrogen groups in space so as to remove that plane of symmetry factor and make them optical isomers.

Geometrical isomers, however are variations of a compound about the central metal atom atom or ring or a double bond, in which the arrangement of groups is different. So square planar complexes can show geometrical isomers. The one is your question can be depicted as - 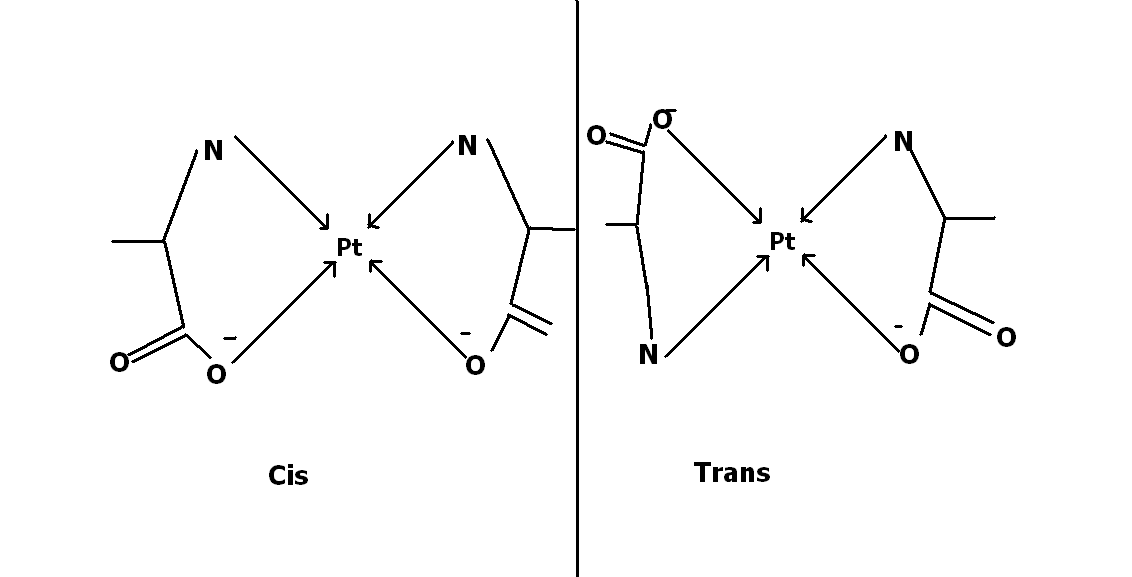 If you include the configuration of the chiral carbon of the ligand, there can be a few more structures made.

Not the answer you're looking for? Browse other questions tagged coordination-compounds isomers optical-properties cis-trans-isomerism or ask your own question.