As proved by rate of EAS, mesomeric or simply conjugated resonance is weaker for halogens than inductive and make them electron taking, with fluorine almost doing nothing due to strongest mesomeric and strongest inductive among halogens, So, halogens should take electrons away from any system if they do it in a specially conjugated system known for many resonating structures 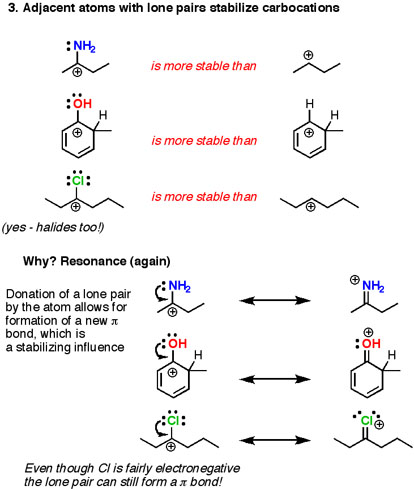 If we have simple carbocation as shown in the chlorine and carbocation, being right next to chlorine Inductive effect must overpower resonance/mesomeric but why the opposite happens?

Simply put, the energy costs for a sextet carbocation are too high to allow chlorine's strong inductive effects to dominate the situation.

The driving for for a carbon octet is very high.

If we have a simple carbocation as shown in the chlorine and carbocation example, being right next to chlorine the inductive effect should overpower resonance/mesomeric but why does the opposite happen?

No, it shouldn’t. Remember that chlorine’s electronegativity — a measure for the strength of its inductive effect — is less than both oxygen’s and nitrogen’s. Therefore, the inductive effect is weakest for chlorine.

Not the answer you're looking for? Browse other questions tagged aromatic-compounds resonance halides or ask your own question.